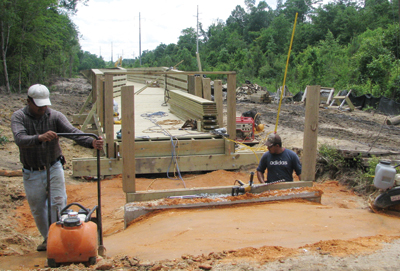 Brewton residents will soon be able to take a scenic route from O’Bannon Park to Burnt Corn Creek Park.

The project — nearly two decades in planning — involves the construction of an elevated walking trail from one park to the other, offering walkers a scenic view of the city’s unique wetlands.

“It is just about finished,” Brewton Director of Parks and Recreation Gary Hill said of the first stage. “The elevated walking trail is the first step.”

The project is costing $400,000, the majority of which has been funded by state and federal grants. The city has matched 10 percent of the cost.

Future stages of the walking trail could extend to the Brewton Area YMCA and beyond. Brewton Mayor Ted Jennings said the city has been talking about the project for almost 20 years.

“We have been thinking about it for a long time,” Jennings said. “This first phase is over wetlands, and that made it a little more difficult. It is a little unique to have these wetlands right in downtown, and we need to showcase them.”

The work is just about complete on the Burnt Corn-O’Bannon phase of the trail. Those working have to build sidewalks to meet the ends of the trail. Standing nearby is a state engineer keeping tabs on each bolt, making sure the meet all the requirements.

City leaders hope one day to connect all of Brewton’s parks with a walking trail.

“We have a long range plan to tie this walking trail to others to make a loop around town from park to park,” Jennings said. “The YMCA stretch will be next, then to Dogwood Hills Golf Course, to Sportsman Park and eventually back to Burnt Corn.”

Further stages of the walkway could take some patience — and money.

The big problem (is) after you do the Y’s part, then you have to worry about the roads and streets that will have to be crossed,” Jennings said. “It’s going to take a lot of volunteers and money to complete. Grant money is going to get even harder to get with the economy like it is.”

Brewton resident Eric Douglas, who is president of the Alabama Hiking Trail Society, has been offering his expertise to plan out the trail. Douglas said he would like to see more people help plan the next stages of the project, and he believes volunteers like him would be glad to see the walkway to completion.

“Several people have voiced opinions about what we all want, and we have even had a couple of very informal meetings, but none of it has gone beyond the talk stage,” Douglas said. “I would really like to see us get some local and state officials to come together to see what kind of ideas we have. There are enough volunteers that would be willing to spend at least some time working with something like this.”