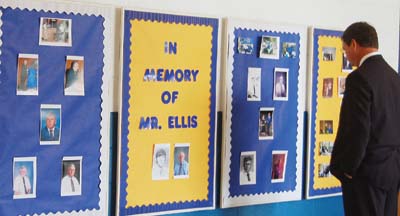 The influence of Phillip Ellis was evident Friday as hundreds of mourners gathered at the W.S. Neal High School auditorium to honor him during funeral services held there.

The Rev. John Mathieu and the Rev. Danny Benjamin presided over the service, attended by hundreds of friends and family as well as staff and faculty of the school he served with for 38 years.

Ellis died Monday evening at his home after more than a year of battling multiple myeloma.

The setting for the services was “appropriate” because of his love for the school, Mathieu said.

“It is appropriate for us to gather here today to honor Phillip Ellis,” Mathieu said in his remarks. “This is the school he loved, the stage he loved, the community, state and nation that he loved.”

Throughout the service, both ministers reminded those in the audience of the influence Ellis had on so many lives.

“This one life has touched hundreds, if not thousands, of lives,” Mathieu said. “This gives us an opportunity to consider our own lives.”

Benjamin said the influence Ellis had on his life began in 1972, Ellis’ first year of teaching at the East Brewton school.

“It is an honor to celebrate the life of Phillip Ellis today,” Benjamin said. “He meant so much to so many people, whether it was as an ag teacher, principal, mentor, farmer or friend. I first met Mr. Ellis when he began at W.S. Neal as an ag teacher. For 38 years, he graced the halls of W.S. Neal High School as an ag teacher for 17 years and as principal for 21 years. He has made a difference in the lives of so many from students, faculty, colleagues and friends. He was an icon. When you thought of W.S. Neal, you thought of Phillip.”

During his many months of illness, Ellis set three goals for himself, Mathieu said.

“Phillip was a man of great determination and grace,” Mathieu said. “Last September, he had a goal of being able to walk his daughter, Karen, down the aisle for her wedding. Not only did he do that, he later danced with her at the country club. He set a goal to be able to hand our diplomas at graduation this year. He accomplished that goal. He also set a goal of being able to worship God once again at First Presbyterian Church and he achieved that goal as well.”

Paul Castleberry, Ellis’ son-in-law, told mourners he could sum up his impression of his father-in-law in one word.

“Influence,” Castleberry said. “He knew I wasn’t happy in the direction I was going with my work. He told me ‘be an ag teacher.’ I couldn’t get that out of my mind, and two weeks later, I found my self enrolled in the school of education to become an ag teacher. I will follow in his footsteps. One small suggestion from him changed the direction of my life.”

“I was blessed to have the privilege to know him,” Benjamin said. “He loved people and he loved God. He has done what no other man has done at W.S. Neal High School. He served longer than any other principal at this great school. Students were touched by him. We received word that a former student stationed in Iraq called to let the family know he was praying for them.”

Interment was held at Magnolia Cemetery in Evergreen.

Donations to the Phillip M. Ellis Scholarship fund may be made at First Exchange Bank in Brewton.