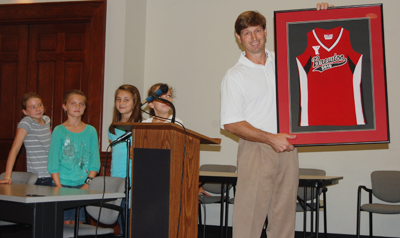 A framed jersey from Brewton Little League Softball’s inaugural season will hang in city hall, after a presentation Tuesday at the city council meeting.

Volunteer Will Ruzic presented the jersey to council members after he and players thanked them for their support of the new program.

The Little League softball program expanded a program that had already existed at the Brewton Area YMCA, Ruzic said.

“You saw a need to take it to the next level,” he said. “Everybody was able to come together to make it happen.”

Ruzic said the first year was successful. “It was a tremendous success for an inaugural year,” he said. “We were overwhelmed when these girls took the field.”

Softball players also expressed their appreciation to the council.

“Thank you for giving us the money,” Mary Madison Brown said. “We won some, and lost some, but we learned doing it.”