Kidney donation match made in heaven 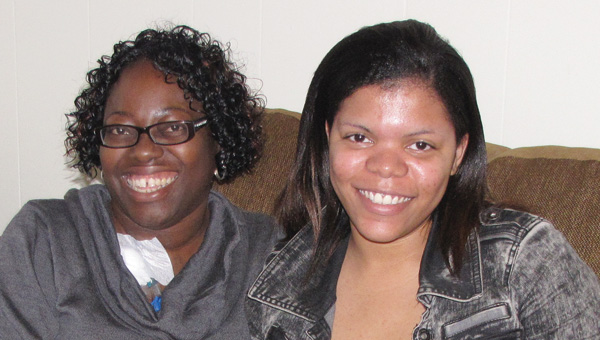 When most people ask the customary “how are you?” when approaching a friend or family member, they usually expect the same “I’m fine” answer.

When 24-year-old Trischelle Salazar asked her stepmother, Kris Lyons the question, the answer would change both of their lives forever.

A series of events landed Kris Lyons on the donor list for a kidney after being on dialysis for nearly a year.

“When I went on dialysis Dec. 31, 2009 in Brewton, I didn’t think getting a kidney would be possible,” Kris said. “I was told when I was placed on the donor list that it could take as long as five years to receive a kidney. For some reason, African-Americans just don’t consider donating organs.”

The fact that she would have to wait so long for a new kidney, or the fact that she may never receive one, is one that Kris has resigned herself to early on in her treatment for kidney disease.

“I accepted it as just part of my life,” Kris said. “I just thought it was something I would just have to live with.”

Kris said her church family at Saints With A Vision were supportive of her situation and were helping her to get the word out about encouraging organ donation.

Audrey America, pastor of the church, had more interest in her situation than others in the community. The widow of former County Commissioner William America had seen her husband suffer from kidney cancer until his death last year. She said supporting Kris was never in question.

“We knew how bad things were for her,” America said. “We just got behind her and began to give her support. We prayed for her and helped as much as we could. We are a very close-knit church family and we wanted to help our sister.”

The opportunities Kris had at church to relate her struggles and story with members of the congregation led to Trischelle’s question on how she could help.

“Kris was at church and talked about what she was going through,” Trischelle said. “I knew she was sick, but I didn’t know what was wrong with her. I didn’t know anything about kidney disease. She talked about her doctor’s appointments and dialysis. I had no idea how sick she really was.”

Trischelle said she immediately knew what she was meant to do after hearing how Kris was struggling with her illness.

“I love her like my mother,” Trischelle said. “I asked her what she had to do to stop dialysis. When she told me she needed a kidney I told her I’d give her one of mine.”

Although Trischelle loves Kris like a mother, she admits their relationship hasn’t always been perfect.

“The last time I saw her I was 5 years old,” Trischelle said. “When I was 21, my half-sister found me on MySpace and invited me to come here for Thanksgiving. After that visit and getting back in touch with some of my family, they were able to convince me to move here.”

After Trischelle’s move to Atmore, she rekindled the relationship with Kris.

“When I came here, my children and I moved in with her,” Trischelle said. “It was tough sometimes since we had been apart for so long. We had our arguments, which is natural for any mother-daughter situation when both people have opinions. When I was able I moved out but still wanted to stay in Atmore.”

Through those rough times, Trischelle said she always kept respect for Kris.

“I was pretty bad at times but she just loved me anyway,” Trischelle said. “I guess you could say it pays to be good to people no matter how they treat. Because she was always good to me, I am willing to do this for her. You just never know who you are going need.”

Although non-relative donations are rare, Trischelle and Kris both began testing to see if the compatibility existed that would allow for the kidney transplant.

“We both went through some extensive testing,” Kris said. “There were a series of tests on both ends. They pretty much test you for everything and screen for every possible medical issue. It was a day-long battery of tests and a lot of information about expenses, recovery, diet — a whole team of people get involved in transplant procedures.”

Trischelle said the testing wasn’t difficult and it gave her the answer she hoped to hear. “We waited about a week to find out if there might be a potential match between us,” Trischelle said. “We got the call and they said ‘you’re a match, you can give her a kidney.’”

The two will travel to the University of Alabama at Birmingham Medical Center March 10 — World Kidney Day.

“The surgery will be on March 11,” Kris said. “Trischelle will be home on Monday, but I’ll have to say there for about two weeks.”

Kris’ recovery will require an additional two weeks in Birmingham to remain close to doctors in the event of complications.

“I’m more worried about her than I am about me,” Trischelle said. “Our relationship has been pretty good. We’ve had our problems just like any mother and daughter. Even when I was bad, she was always good to me. I guess it pays to be good to people.”

Although Trischelle had always believed in organ donation, she never thought it would happen the way it has for the pair.

“I’ve always said I wanted to donate my organs,” Trischelle said. “I just never imagined I’d do it while I was still alive. From the minute I told her I would give her a kidney I’ve never had second thoughts. I wouldn’t change this for anything.”

Kris said the planned transplant is something she prayed for and can now see as an answer to those prayers.

“I am blessed,” Kris said. “I never imagined it would happen this way.”