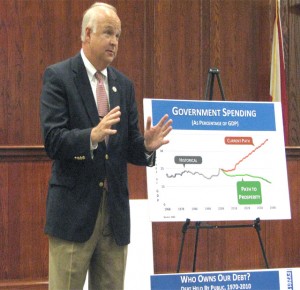 In one of several town hall meetings held by Congressman Jo Bonner, a Brewton audience learned Thursday just how significant the problem is for the United States

“There has been a four month debate on how we can get out of the hole we’re in financial,” Bonner said. “We didn’t get into this hole overnight and we won’t be able to get out of it overnight.”

Bonner also said some of the problems that exist in government aren’t from forces over which it has no control.

“Some of our problems are of our own doing,” Bonner said. “We are spending too much money and we are borrowing too much money. This country is three and a half trillion dollars in debt today.”

In an effort to give an idea of just how large an amount the national debt currently is, Bonner explained that a person could borrow $1 million dollars a day for 3,000 years before hitting the $3 trillion mark.

Getting a handle on the debt situation is imperative to keep the country a float, however, Bonner said current ideas of increasing taxes isn’t the right approach.

“I believe we are over taxed now,” Bonner said. “In this economic time, raising taxes would be the biggest mistake we could make.”

In explaining the anatomy of the debt, Bonner explained how the money being borrowed is increasingly putting the United States at the mercy of other countries.

As in the case of practically every loan/debt situation, borrowers are paying back interest to lenders and the America’s borrowing is no exception.

“Each year we pay back $202 billion in interest on loans,” Bonner said. “That is a large part of our mandatory spending that we can’t cut.”

Other areas that are considered mandatory spending include Social Security and Medicare/Medicaid. In his explanation, Bonner said cutting those programs simply isn’t an option.

“We are obligated to spend specifically budgeted amounts for Social Security and Medicare,” Bonner said. “We can cut costs in areas of defense and in the size of government, but we are bound in spending for those services.”

Bonner explained that Americans rise well to challenges such as coming to aid of those affected by Tsunamis, nuclear meltdowns and a rash of tornadoes.

“There are parents and grandparents who made sacrifices to make our lives better and we will do the same,” Bonner said. “There is no challenge we can’t meet if we work together.”