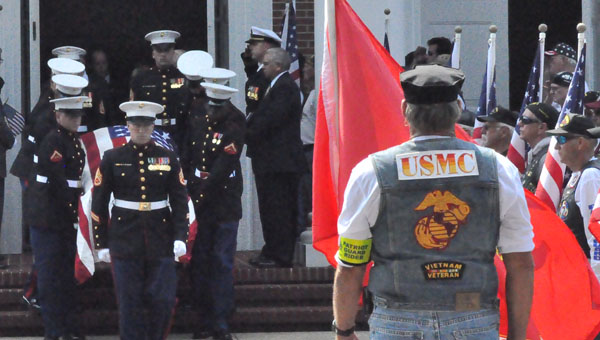 Main Street in Atmore was lined with people and flags Friday afternoon after Lance Cpl. Travis M. Nelson was remembered at a funeral service at First Baptist Church in Atmore.
With Patriot Guard riders on flag-adorned motorcycles leading the way, the procession moved up Main Street as residents of all ages paid their respects to the fallen Marine.
Nelson, a former resident of Bratt, Fla., was killed in action last week when his unit became involved in a small arms battle in Afghanistan.
Those gathered were civilians as well as current and retired members of the different military branches.
Ted Findley of Canoe is a retired U.S. Marine who wanted to do his part to pay his respects to Nelson and his family.
“For one, I was a Marine,” Findley said. “I was a 19-year-old lance corporal at one time just like this young man who lost his life. This is the least we can do for this young man.”
Also on hand Friday were the Patriot Guard Riders who led Nelson’s body back to Atmore on Wednesday afternoon.
Members of the group made the trip back to Atmore on Friday to lead Nelson to his resting place at Oak Hill Cemetery.
Louis Pittman is a Patriot Guard rider who also served time with the Marine Corps.
As a Vietnam veteran, Pittman rides with the PGR to honor his fallen “brothers.”
“I was in the Marine Corps and I’m a Vietnam veteran,” Pittman said. “I do it just to honor the memory of the men that die, especially these young men. This 19-year-old young man that is being laid to rest today is my brother. He’s a Marine, so he’s my brother, and this is to honor his memory.”
Serving the military is a huge honor in Findley’s eyes.
“That’s the probably the biggest thing a person can do as far as preserving our country,” Findley said. “Our military is what keeps it together. I have a son that is chief in the Coast Guard where he is stationed in Mobile. He’s been in 17 years, and he loves what he is doing.”
With so many civilians out to honor Nelson, a strong sense of patriotism could be seen throughout Atmore.
Seeing so many people who do not serve in the military was a wonderful sight, Pittman said.
“It’s great to see civilians not just military to come out for this,” he said. “The escort we did Wednesday coming into Atmore people lined the streets, and it was really amazing.”
Protestors from the controversial Westboro Baptist Church of Topeka, Kan., were rumored to be coming to Atmore on Friday, but none showed. The organization — which is recognized as a hate group by the Southern Poverty Law Center — often pickets at military and other prominent funerals.
Instead, the streets were lined with Atmore residents, veterans and students who waved flags or stood with their hands over their hearts.