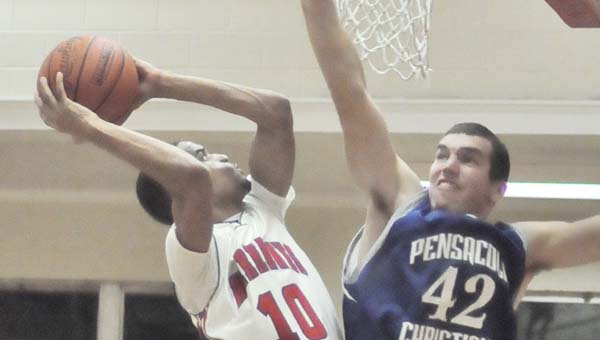 After suffering a loss in their first game of the season Saturday at Pensacola State, it was another team from Pensacola that defeated Warhawks of JDCC Tuesday night at home as Pensacola Christian downed the Warhawks of Brewton 85-62.
The loss dropped JDCC to 0-2.
Pensacola Christian led the Warhawks by 11 points at the half, 36-25, and outscored the Warhawks by 12 points in the second half, 49-37, to get the win by 23 points.
Pensacola started the game on a 5-0 run and led JDCC 8-2 with 18:41 left in the first half.
JDCC would cut the lead to 11-9 with 16:04 left before Pensacola went on top 24-13 at the 8:59 mark. JDCC cut the lead to 24-17 before Pensacola would grab a 28-17 lead with 6:33 left in the first half.
From there, JDCC would go on an 8-0 run to cut the lead to three points, 28-25, with 2:58.
From there, Pensacola would use an 8-0 run of their own to end the half with a 36-25 lead.
In the second half, Pensacola would increase their run to 10-0 and take a 38-25 lead over the Warhawks.
JDCC would cut the lead to 10 points twice with the latest coming with 15:27 left in the game.
Pensacola would then go on another 8-0 run to take a 51-33 lead with 14:04 left to play in the game.
JDCC would trail by as much as 25 points in the game but would fall by 23 to the Eagles of PCC.
Gabriel Rice led JDCC in the loss with 14 points and was joined in double figures by Brandon Scott and Larel Jackson as both had 13 points.
Turmonte Ragland added seven points in the loss while Malcolm Bell chipped in six points. R.J. Bowers added five points and Adam Stumpf and D.J. Jackson had two points each.
JDCC shot 11-for-19 from the free throw going 3-for-4 in the first half and 8-for-15 in the second. Pensacola Christian shot 12-for-17 from the free throw line going 4-for-6 in the first half and 8-for-11 in the second. The Eagles of Pensacola made nine 3s in the win including six in the first half while JDCC made three the whole game—all coming in the final 2:39 of the game.
JDCC head coach Allen Gainer declined comment after the game.

Pensacola State 75, JDCC 53
In their first game of the 2011 season Saturday at Pensacola State, JDCC started their season 0-1 with a 75-53 loss.
JDCC led Pensacola State 10-4 five minutes into the game but found themselves down 30-28 at the half after Pensacola hit two 3-pointers in the last minute to take the lead.
“We played really well for the first 32 minutes, leading most of that time,” Gainer said. “With eight minutes to go, Pensacola was up 54-47 then we fall down 69-48 with about two minutes to go.”
No individual stats from the Pensacola State game was known as of press time.
JDCC will be back in action Saturday at Southern Union. Game time is set for 3 p.m. in Wadley.
JDCC will return home Tuesday, Nov. 15 when they take on Pensacola State again. Game time is set for 7 p.m. in Brewton at Warhawk Gym on the campus of JDCC.