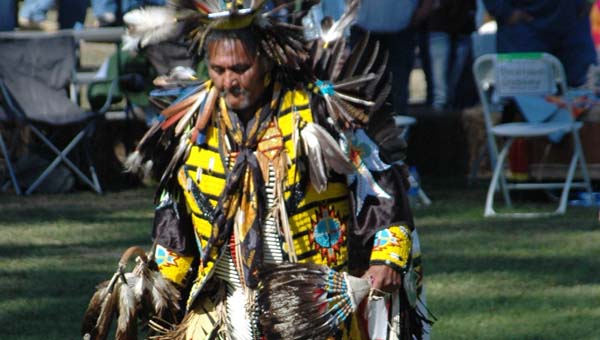 Turkey and dressing were traded for roasted corn and football took a back seat to tribal dances in the Atmore area over the Thanksgiving holiday, as thousands turned out for the 41st annual Pow Wow festival held Thursday and Friday in Poarch.
Poarch Creek Indian Treasurer Robert McGhee said the festival drew one of the biggest crowds in recent memory.
“It was a great number for the turnout,” McGhee said. “We were well pleased. We were glad everybody had the opportunity to come out and visit with the Poarch Creek Indians and enjoy the fun and see the culture and the dancing.”
That culture of dancing is always a focal point of the PCI Pow Wows, and this year was no exception. Dancers from all over the country were featured in a variety of tribal dances, including visiting tribal members from Oklahoma and Mississippi. As the crowd grew Thursday, PCI’s Pow Wow Club, along with the Oklahoma Creek Stomp Dancers, entertained audiences with a combination of native dances, drum solos and songs performed in the Creek language.
Thursday’s opening ceremonies also included guest speaker Walter Echo-Hawk, author of the book “In the Court of the Conqueror,” a look at injustice towards Indians in the American court system.
Thursday’s festivities also included the annual princess contest, intertribal dance competitions in the Warriors Tournament and presentations of social dances from the Mississippi Band of Choctaw Social Dancers and the Oklahoma Creek Stomp Dancers, which continued well into the day Friday.
In addition to the food and entertainment, this year’s Pow Wow also included plenty of games and rides for children and several presentations focusing on the history of the Poarch Band of Creek Indians, led by tribe historian Robert Thrower. Souvenirs are always a big part of the PCI Pow Wow and this year’s festival featured enough booths to keep the large crowd browsing well into the evening.
McGhee said it is always refreshing to see a large number of both vendors and patrons turn out for the festival.
“We’ve had a little different take on things (this year),” McGhee said. “I would definitely say there are more vendors. We’ve had a beautiful two days to enjoy the festivities. I would think that it’s been a crowd pleaser.”
As things wrapped up Friday afternoon at the 2011 PCI Pow Wow, McGhee said he felt little could be done to improve upon this year’s event.
“Everything seems to have come together. It was a real success,” he said. “We’re just happy everybody had the opportunity to come out and to Poarch to see where the Poarch Band of Creek Indians live and reside and to see the history and see what they’re all about.”