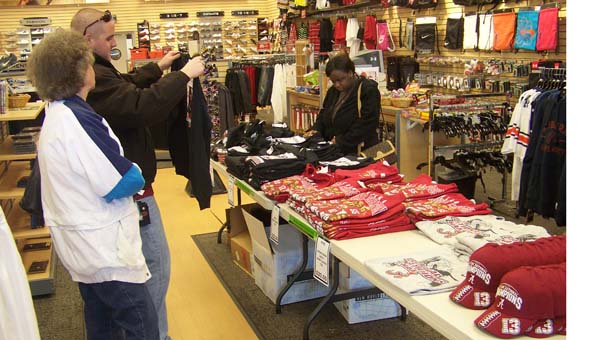 Alabama fans get attire after the 2009 win over Texas

If the Alabama Crimson Tide football teams comes away with a win over the LSU Tigers Monday night in New Orleans for the BCS National Championship, fans in Brewton came get championship attire tonight to celebrate the win.
Hats and T-shirts along with other Crimson Tide apparel proclaiming Alabama as the winner of tonight’s BCS Championship Game will be at Brewton’s Hibbett Sports, where items will be put out on shelves as the clock winds down if the Crimson Tide prevails over LSU.
Hibbett Sports plans to open immediately after the game —only in the case of an Alabama victory.
“We will open as soon as the game ends until 1 a.m. or until customers are gone,” Hibbett Sports manager Amber Findley said. “If we don’t sellout Monday night, we will open at 8 a.m. Tuesday morning. We normally open at 9:30 a.m. Score shirts will be available Tuesday afternoon.”
The championship gear will include the locker room hats and T-shirts the players wear following a win.
“We will have shirts and hats just like the team,” Findley said. “We will also have youth shirts and women’s shirts and different magnets and the whole works.”
With an Alabama win Monday night, it will be the third straight year a team from Alabama has won the national championship. Alabama won the title in 2009 and Auburn won the title last year in 2010.
Findley said the championships have helped business out a lot.
“It has helped a great deal,” Findley said. “We sell a lot those night and that week and it helps.”
Findley said the store will only open following an Alabama win Monday night.
“Our stores in Louisiana will open if LSU wins, but we will only open if Alabama wins,” she said.