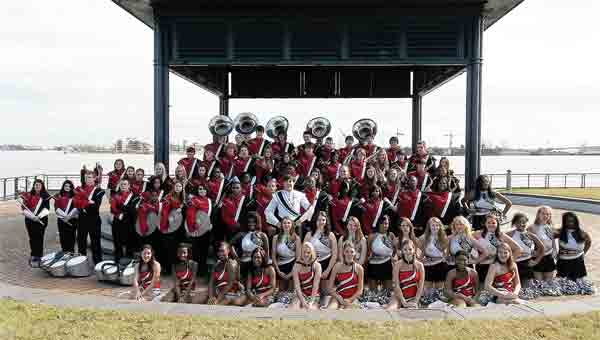 Words like “flawless,” “amazing,” and “exciting” were being tossed around the bandroom entrance at T.R. Miller High School Tuesday afternoon as band members unloaded items used during performances over the weekend in New Orleans.

Patrick Weaver, who lead the band for the last time as field director, said the trip was one he won’t soon forget.

“It was the most amazing experience of my life,” Weaver said. “To stand there in that stadium with 80,000-plus people looking at you was wonderful. To see all that crimson and white — it was just amazing.”

Weaver, who’s parents were along as chaperones for the trip, said the atmosphere throughout the weekend was electric with LSU and Alabama fans mingling in the streets.

“When we were on the street we could hear fans on both sides cheering and having a good time,” Weaver said. “LSU fans would look at us and say ‘Tiger bait’ and we’d just say ‘Roll Tide’ and everyone was fine with that.”

The atmosphere was one band director Lance Gainous may have had some concerns about prior to the weekend event.

“With all the ruckus that was going on in New Orleans it could have been tough,” Gainous said. “But, it was absolutely perfect. We didn’t have any problems or issues. The behavior of our students was astonishing. They represented this community with pride and excellence. I’m so proud of them and happy we had a great trip.”

The band did more than perform at the halftime of the BCS championship game Monday night. The group performed in other venues — including a pep rally at Jackson Square.

“That pep rally was the most fun thing about the trip for me,” Weaver said. “That was my last time to stand in front of the band and conduct them. During that pep rally, all eyes were on us — not any other bands or groups. Seeing that was just the best experience ever.”

Weaver’s parents, Dan and Kathy Weaver, were also involved in the performance with prop duty during the show.

“We had our assignments, too,” Dan said. “We had to take care of about a 20-yard area with our props that were used during the show. Just being out there on that field was amazing.”

Kathy, who said she was still excited about the trip, said being on the field and so close to the action was an experience to remember.

“I looked up at all those people who paid big money to be in those seats,” Kathy said. “Then I realized I was right there in the middle of it all. Right there on the field while the game was going on. We had to clear the tunnel once to let the team through. Trent Richardson, Nick Saban and the rest of the team walked right there beside us and even spoke to some of our people. What a fantastic time we had. I’m just so happy for our students.”

With laughter and smiles, members of the band, staff members and band parents busily unloaded equipment, luggage and memories from the vans and busses Tuesday afternoon.

“We did some of our best performances this weekend and gave the New Orleans crowd something to remember,” Gainous said. “I think we’ll all remember this trip.”