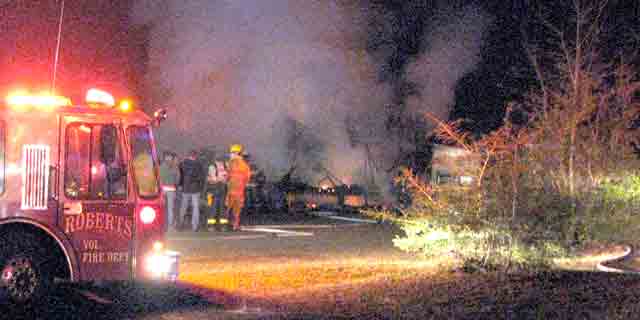 Emergency responders could only contain the blaze from reaching foilage Friday night and Saturday morning when the Mendibles' home was totally lost in a fire. No cause for the blaze has been determined.

A mother and two young children are happy to be alive — but are also dealing with the loss of their clothes, other belongings and their home.

Stephanie Allen Mendibles and her two sons, Aden and Ethan, are spending some time with her mother, Susie Allen, after their home was lost in a blaze Friday night on Ridge Road.

The blaze was reported to emergency response officials just after 11:30 p.m. Friday, but workers remained on the scene into the early hours of Saturday in an effort to contain the blaze.

Escambia County Rescue Squad member David Cole, said they were the squad was the first to arrive on the scene of the blaze.

Mendibles said she and her children were at her mother’s home when they learned about the fire.

“A neighbor told us the house was on fire,” Mendibles said. “My brother, who lives next door, though we were in the house so he went in to see if we were there.”

Mendibles said her brother explained the fire appeared to have started in the kitchen area of the home.

The exact cause of the blaze was not immediately known. Officials with the Alabama Fire Marshal’s office have been contacted and an investigation into how the fire began is being conducted.

The family has had some immediate needs met through the assistance of the East Escambia Chapter of the American Red Cross Brewton. Initial needs of food and clothing are provided by the agency in the event of a house fire.

For those who would like to help with needs for the family, contact the American Red Cross office at 867-3426.