WSN baseball advances to round two 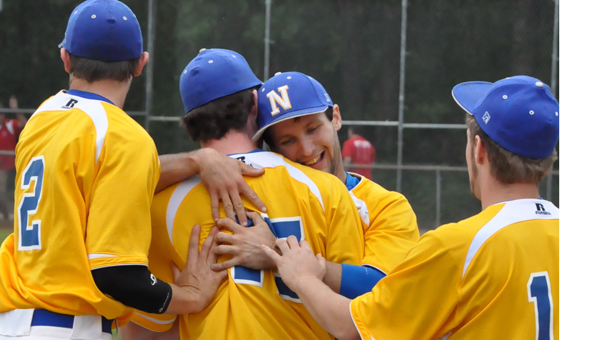 After splitting with No. 9 Saraland Friday night at home in the first round of the class 4A playoffs, the W.S. Neal Eagle baseball team got “the monkey off their backs” Saturday as they clinched the best of three series and advanced to round two.
W.S. Neal took game one over the Spartans 4-3 in eight innings Friday afternoon before blowing a 5-0 lead in game two to fall 9-6 and have to return to the field Saturday in a deciding game three.
In the third game, W.S. Neal jumped out to another 5-0 lead only to see Saraland tie the game at 5-5 in the second inning. From there, W.S. Neal outscored the Spartans 4-1 including getting two runs in the top of the seventh on back-to-back squeeze plays to help get the win by four.
“It feels wonderful. It is the best feeling,” W.S. Neal head coach Coy Campbell said. “We finally got the monkey off of our back in the first round. We have been there four times and could just never get by it. We got beat by UMS-Wright last year in the first round and they won the state championship. The good thing is we get to go back and play them next week. We have not forgot it.”
Campbell said the kids played hard Saturday to get the win.
“Cam Blackman pitched his tail off today and Keith Bradley came back and threw well today,” he said. “We got some big hits. Going back to last night, we are up 5-0 and then we look up and its 5-5. The kids could have quit, but they didn’t. I have a great group of kids and I am proud of them.”
W.S. Neal improved to 22-10 overall now and will face No. 4 UMS-Wright (22-9) in Mobile in round two Friday in Mobile. A third game will be played Saturday if needed.
Last year, W.S. Neal hosted UMS-Wright in round one and took game one 14-6 before losing game two 5-3 and game three 13-0 to be eliminated with a 21-8 record in the first round.
The win Saturday to advance to the second round is thought to be the first time W.S. Neal has advanced to the second round of the playoffs since 1990.
In 1990, the Eagles, under the direction of head coach Danny Parker, went to the state semi-finals before falling to Saint Paul’s.
W.S. Neal defeated South Choctaw in round one, Lamar in round two, and Vincent in the quarterfinals before falling to Saint Paul’s in the third and deciding game of the semifinals—one game shy of the state championship game.

Game one: WSN 4, Saraland 3, eight innings
Trailing 3-1 in the bottom of the seventh, W.S. Neal scored two runs to tie the game and force extra innings and scored the game winning run in the eighth to get a 4-3 win to take game one.
After scoring two in the seventh to tie the game, Brian Settle’s RBI single scored Reid Johnson for the one-run win.
W.S. Neal led 1-0 after the second inning before giving up all three runs to Saraland in the fifth inning.
Settle also earned the win on the mound for the Eagles as he allowed three runs, six hits, struck out five and walked one and hit one. At the plate, Damion Williams had a single, Hunter Mullins had a single, Reid Johnson had a double, Settle had a single, Jeremy Myers had a single and Dylan Godwin had a single.

Game two: Saraland 9, WSN 6
Saraland (serving as home team) scored nine total runs in fifth and sixth innings to rally to defeat W.S. Neal in game two 9-6.
W.S. Neal led 5-0 after the top of the fifth before being held to one run in the sixth while the Spartans scored four in the fifth and five in the sixth to get the win by three.
Keith Bradley, Myers and Cam Blackman all pitched in the loss.
At the plate for W.S. Neal, Williams had a single, Mullins had two singles, Johnson had a homerun in the fourth inning, Williamson had three singles, Settle had a single, and Christian Purvis had a single.
“I thought our kids battled,” Campbell said after the Friday split. “Brian pitched real well We were down two going into the seventh inning and we put something together and the next thing you know we go to extra innings and get a few big hits and we score the winning run. That is the kids I have been coaching for the last five years. I am proud of them. In the next game it is kind of a tale of two stories. The same story for them. We were up 5-0 and they come back and go ahead and we just fell apart defensively after they got it close. That is baseball.”

Game three: WSN 9, Saraland 6
In the third and deciding game, W.S. Neal blew another lead but rallied to get a 9-6 win to take the series.
The Eagles led 4-0 after the first inning and 5-0 after the top of the second before Saraland scored five runs of their own in the second to tie the game.
W.S. Neal would get one run each in the third and fourth while Saraland scored one in the bottom of the fifth to cut the lead to 7-6.
Needing insurance runs in the seventh to help get the win, W.S. Neal squeeze bunted and scored two runs to help get the win by three.
“It was very big,” Campbell said of the top of the seventh. “I don’t remember the sequence of how it got started but we got men on base and we had two squeeze bunts. One of them got by the catcher and next one was way up in the zone and Christian Purvis did a great job of going and getting it down. We have been doing it all year. It was just big. Our kids executed it and all the credit goes to them.”
Leading by three and three outs away from advancing to round two, Saraland got two runners on base but the Eagles held to get the win.
Cam Blackman earned the win on the mound while Bradley earned the save.
At the plate for W.S. Neal, Williams had two doubles, Mullins had a double, Johnson had a single, Settle had a single, Purvis had three singles.
Now the Eagles will meet up with the two-time defending state champion UMS-Wright who ended their season last year.
“We just talked about it after the game that we have not forgot about last year,” Campbell said. “That has been one of our things… ‘we remember, we remember.’ That was a bad feeling last year. I don’t have but three seniors and they have been with me for five years. They just don’t quit. When our backs have been against the wall this year—the Thomasville series and this series— we have responded and I am just proud of them.”
Senior Hunter Mullins said the win Saturday was a good feeling, but there is “pay back” left to get.
“Last year we did not win and we had it cut short unfortunately, but we beat a good team today and I feel good about going to the next round,” he said. “I am glad we get to play them. We all want revenge because they beat us last year and embarrassed us last year on our home field. We want to go there and get some pay back.”
Campbell said he does know much about UMS-Wright, but they must be doing something right.
“I do know they are No. 4 in the state and they have won back-to-back state championships so they are doing something right over there,” he said. “We will have our hands full but we are glad to miss a little spring break and practice a little baseball and go there and see what we can do.”