Prayers go up on Day of Prayer 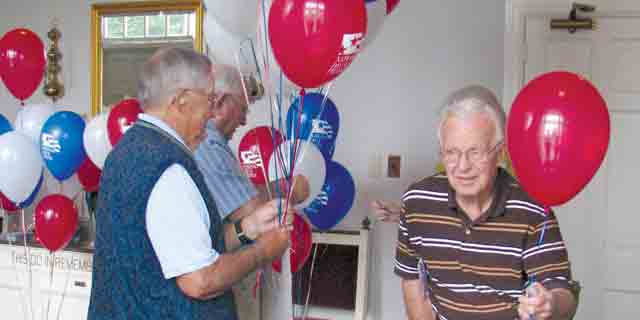 Frank Scott receives a balloon from Wilburn Perry and Roger Williamson following the prayer services held Thursday at First Baptist Church of Brewton. The balloons were released following the services in recognition of the National Day of Prayer.

Dozens of area residents braved an “out pouring” of rain Thursday to attend the National Day of Prayer services held at First Baptist Church of Brewton. The Rev. Jack Fitts, pastor of First Baptist Church, said the pouring rain was an appropriate accompaniment to the day’s events.

“We join millions of other Americans today as we pray for God’s out pouring on our nation,” Fitts said. “We are blessed to be here today.”

As other area church pastors took the podium to pray for God’s blessings, each one focused on a special area of prayer.

The Rev. John Mathieu offered words of encouragement and prayer as he focused on asking prayer for the community.

“It is impossible to govern a community, a family or our lives apart from Him whom holds all things together,” Mathieu said. “We are here in Brewton voluntarily but by God’s appointment.”

The noon event Thursday was originally planned on the lawn of the Escambia County Courthouse, but rainy conditions forced the services to the sanctuary of the First Baptist Church.

“I want to thank First Baptist for organizing this event for our community,” Mathieu said. “It is a blessing to be here and to join in prayer today.”

A gathering of about 100 people joined in song and prayer throughout the service that was dotted with prayers for community, county, state and national leaders as well as the people in the area surrounding Brewton.

Offering prayers for the event were the Rev. Bryan Garrett, the Rev. Tommy Quick, the Rev. Michael King, the Rev. Todd Ray and the Rev. Ed Glaize.

As the congregation departed the services, balloons were distributed to be released as a tribute in recognition of a community’s gathering for prayer.