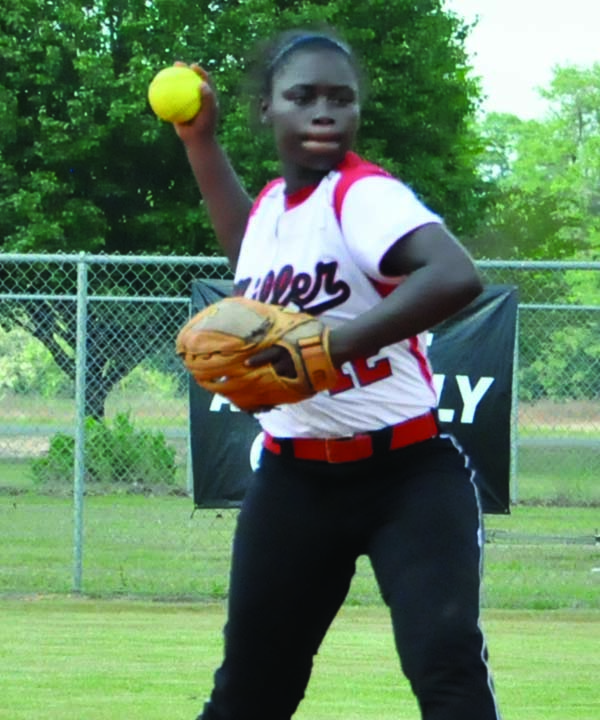 Recent T.R. Miller graduate and multi-sport athlete Leah Brundidge signed a softball scholarship Thursday morning to play softball at Troy University.
Brundidge, who plans to major in sports medicine, played volleyball, softball, track and basketball at T.R. Miller.
“It’s a surreal feeling,” Brundidge said of signing a scholarship. “Although I’ve been playing sports pretty much my whole life, I never really imagined signing a college scholarship to play somewhere one day. I decided to sign with Troy because I knew that God didn’t place all of these opportunities in front of me just for me to turn them down. The feeling while visiting and also talking to the coaches at Troy was also a huge factor. I could tell that they were about working hard and getting the job done but they also knew how to make it a little enjoyable while doing it. The changes on campus also played a part.”
Going to Troy is not something knew for the Brundidge family. Brundidge’s parents also attended the university.
“I think it’s a cool thing to keep the Trojan train rolling,” Brundidge said. “(My parents) told me that they would support me anywhere I chose to go, but I think it made them both a little happier when I chose Troy.”
T.R. Miller softball coach Greg White was on hand for the Brundidge’s signing Thursday.
“We are very excited for Leah and her opportunity to go play softball at Troy University,” he said. “Over the last six years of playing for T.R. Miller, she has done everything right to put herself in this position. She plays hard and with a lot of passion and respect for the game. The thing about Leah is she is just as good off of the field as she is on it. She will be a great student-athlete at Troy University and an asset to the Troy University softball team. We wish her nothing but the best.”
Kim Owens is the assistant softball coach at T.R. Miller and was also on hand for the signing Thursday. She said Brundidge’s athletic ability and leadership will be missed at T.R. Miller.
“I believe she will be an impact player for Troy and a great asset for the university,” Owens said. “She is one of those kids that are just so special. She’ll do great with whatever she attempts. I know her family is proud of her, and I certainly am. I miss her already but look forward to her accomplishing great things in her life.”
Troy head softball coach Melanie Davis said she is very excited about having Brundidge come to Troy.
“We started to identify Leah late in the recruiting process,” Davis said. “But we are very excited about having her come to Troy. Her father was a national champion running back at Troy and we hope that his daughter will bring the same success in our sport.”
Davis said Brundidge has a very natural swing and in college softball, it can be a big challenge to score runs and she hopes Brundidge’s swing can help score those runs.
“She has a great swing and I think that we can develop her more as a defensive ball player,” she said. “Her intangibles are that she is a great lead on and off the field and has been a great leader for her classmates and had a lot of accolades in high school as she was in SGA and homecoming queen and other things. She was a leader on her varsity teams she played and we need that caliber of an athlete to come in and help our team and maybe be a leader for us. We think she has tremendous athletic ability and leadership and we look forward to having her here at Troy.”
Although she plays others sports besides softball, Brundidge said softball—a sport she has been playing since around age 7 or 8—will be the only thing she plays in college.
“Going into a totally different level of softball, I’m expecting to have to work harder to earn a playing spot and to get comfortable with the different tempo,” Brundidge said. “I hope to one day be a part of a conference championship team though and hopefully even make it to Oklahoma (site of the Women’s College World Series) one day.”
Along with Brundidge at the signing were her parents Eddie and Sybil Brundidge, sister Moriah, and T.R. Miller head softball coach Greg White and assistant Kim Owens.