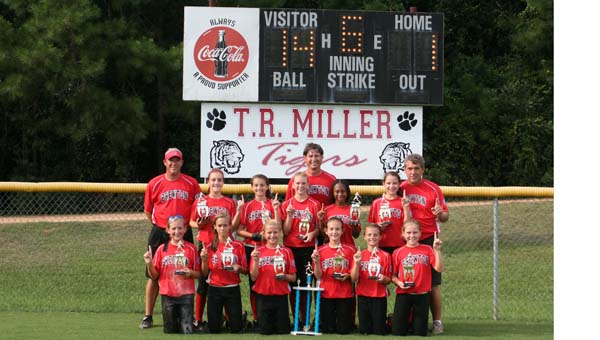 For the second year in a row, the Brewton Babe Ruth softball league brought home a state championship—this time it was on their home field.
On Sunday, the Brewton 12U all-stars defeated Covington County 14-1 to bring home back-to-back titles. Last year Brewton won the 10U championship.
“It was an amazing tournament for the 12U all-stars,” Brewton coach Will Ruzic said. “Many of these girls are the same group that brought a state championship to Brewton last year, so they are accustomed to winning and played the entire tournament with that attitude. It was certainly something special to be able to win this title on their home field. They loved looking out and seeing the stands full, people standing, and people sitting everywhere on the outfield hill, our local support was tremendous.”
Ruzic said he knew the team this year was a young team coming into this tournament and they would have to play their best with minimal mistakes to stay in control and the girls came out in charge and stayed that way through every game.
“They went the entire tournament and never played from behind,” Ruzic said. :They won every inning they played and always kept the pressure on the other team. They executed our game plans almost flawlessly. They made the routine plays, they hit, they got bunts down when needed and used speed on the bases to keep the other teams out of rhythm. It is amazing to watch what can be accomplished when eleven girls come together with the same goal and play as one. They cheer for each other, they are happy for someone when they make a play and when someone does make a mistake there are ten girls there to pick her up, they are what team sports is all about.”
Brewton went 4-0 in the tournament earning wins over Andalusia (26-1), Covington County (10-5), East Brewton/Flomaton (8-2) and a 14-1 over Covington County in the championship game.
“We played Covington County all-stars in the championship game and knew after they played us a good game the first time around that they would probably win their way back out of the loser’s bracket to be in the final game,” Ruzic said. “We watched them all through the tournament knew they hit the ball very well so we had to pitch to them in a way that would hopefully force some weak pop ups and weak ground balls and make the plays. The game plan came together with coach White calling pitch locations and our pitcher hitting her spots. They never had a chance to get their bats going and we manufactured a couple runs in the first two innings and kept the pressure up. We extended the lead with a couple big innings and ended the game achieving the first goal we set for ourselves by winning another state championship for Brewton.”
Ruzic said he could go on and on about how amazing the 12U girls are and the way they play together.
“For anyone who has watched them play it is something special to see,” he said. “I would also like to thank a great coaching staff in Greg White, Terry Reiss and Robbie Floyd who all fill certain roles to make the big picture work.”
Brewton will now travel to Wintersville, N.C., to compete in the Southeastern Regional Tournament.
“We will head out on Monday July 16 for a Tuesday check-in at the tournament and begin play on Wednesday,” Ruzic said. “We hope to be broadcasting on the radio and will do our best to get that information out as soon as we know more about game times. Again, I want to thank the entire community for their love and support, you have created special memories for these girls that they will carry with them for the rest of their lives.”
Overall for the state tournament that Brewton hosted for the 8U, 10U, 12U, 14U and 16U last week, Ruzic was assistant tournament director. Overall, Ruzic said he could not be more pleased with the way the tournament turned out.
“We knew we had worked hard to be prepared and organized but also knew that with this many teams coming there were bound to be issues we had not addressed,” he said. “I feel like the tournament went off without a hitch, with any issue being very minor and addressed very quickly.”
The only issue the tournament saw was the heat, but Ruzic said they did everything they could to offer some form of relief.
“What we could not address was rain and we were certainly blessed to not have to deal with that issue,” he said. “The fields pretty much stayed on schedule with teams being able to show up and play their games on time. We heard nothing but good comments on the tournament and the community as a whole. We were happy to see a couple thousand people come into the community over the four days and see why we think this is such a special place. And of course we hope they spend a little money while they are here.”
Ruzic said overall the tournament was a tremendous undertaking and would not have been possible without it being a group effort.
“Although the YMCA put this tournament together, and I can’t say enough about the 16 days that our director Steven Dickey and sports coordinator Darly Curry put in,” Ruzic said. “It was really a collaboration between the YMCA and the city. They offered nothing but support and did anything we asked including providing a lot of great workers that made this possible. There are too many people to thank individually but just know that everyone’s effort and support is appreciated. I can honestly say that it’s only because we all worked together that this state tournament was an absolute success.”

16U:
The Brewton 16U all-stars went 2-3 in their state tournament. Brewton lost to Covington County 8-6, defeated Atmore 16-4, lost to NWE 11-6, defeated Atmore 13-3 and lost to NWE 11-5.
In games for Brewton against Atmore, Audrey Hamric, Takeysia McFugerson, Krystal Bell, Hannah Weaver, Abbi Roberts, and Madalyn Weaver had hits.
For Brewton against NWE, Hamric had three singles, Bell added a single along with Leslie Holmes and Allan.
Against Covington County, Moriah Brundidge added three singles along with Kelsey Thompson. Hannah Weaver had two singles.
Against Atmore in a 16-4 win, Hamric scored four times to lead in the win. No other stats were known.
Against NWE, Brewton lost 11-6. Hamric had a single, double and a triple, Takeysia McFugerson added a single, Thompson had a single and Erin Wade had single.

Brewton 13s fall to Sylacauga in semifinal round of…