What started as a domestic call turned into an ordeal that spanned nearly six hours Saturday morning before Brewton police officers defused the situation and put one person behind bars.
Charles William Squires III, 47, was arrested and now faces attempted murder charges stemming from the incident. He was identified as a retired pilot with the forestry service. 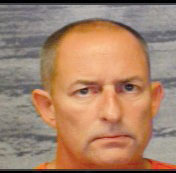 Brewton Police Sgt. Patrick Caylor said a call just after 3:20 a.m. Saturday sent officers responding to a domestic disturbance.
“We were told there were weapons involved in this disturbance on Belleville Avenue and our officers responded accordingly,” Caylor said. “According to our findings, a physical altercation occurred between the suspect and his fiancé and it turned into a dangerous situation. The victim said the suspect had a small caliber pistol and threatened to kill her.”
Caylor said when officers first arrived at the Belleville Avenue home the suspect had fled leaving the shaken victim behind.
“We were able to get a description of the suspect at the scene of the disturbance,” Caylor said. “After processing the scene and questioning some witnesses, we were able to get a better idea of who we were searching for in this case. We had a pretty good idea of the vehicle he was driving and where he might have gone.”
Caylor said officers were able to locate the suspect’s vehicle at his mother’s residents on North Pine Street around 6:30 Saturday morning.
“We were able to confirm it was his vehicle and that he was at that location,” Caylor said. “He refused to come out of the home after we arrived and asked him to comply by coming outside. When he continued to refuse our requests to exit the home, we then made arrangements to have our Special Response Team and vehicle set up at the scene on North Pine.”
Caylor said once SRT officers arrived on the scene they began negotiating with the suspect to have him surrender.
“The team got set up around 8 a.m. and began talking to the suspect to get him to turn himself in,” Caylor said. “During the SRT negotiations, the suspect’s mother did come out of the home and he finally came out and turned himself in to our officers about a half hour after his mother came out.”
Just after 9 a.m. officers took Squires into custody and transported him to the Escambia County Detention Center where he was booked on one count of attempted murder. He was being held in lieu of a $250,000 bond as of press time Tuesday.
“We were being very careful with this situation especially since it was in a residential area,” Caylor said. “I know that people get concerned when they see police cars and our SRT truck in their neighborhood. We didn’t believe it to be a dangerous situation for people in the neighborhood, but we are always mindful of the safety of our officers and residents in the area.”