Elections are on go 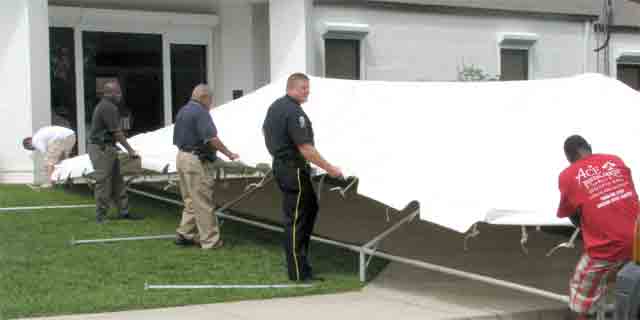 Members of the Brewton Police Department and other City of Brewton employees assisted workers in erecting a protective canopy at the Brewton Community Center Monday afternoon.

“We wanted to make sure we considered the safety and convenience of the people of Brewton when making this decision,” Brewton Mayor Ted Jennings said. “We have monitored the situation and have looked at all of the information available. We may have some bands of rain off and on all day, but we believe it’s a situation we can survive.”

In order to make the voting process less stressful, Jennings said special accommodations were being made protect voters from the rain.

“We are putting up a canopy at the entrance of the Brewton Community Center in case anyone ha to stand in line to vote,” Jennings said. “We are also closing Dogwood Hills an bringing that staff down to transport voters from the front parking lot to the Center by golfcart.”