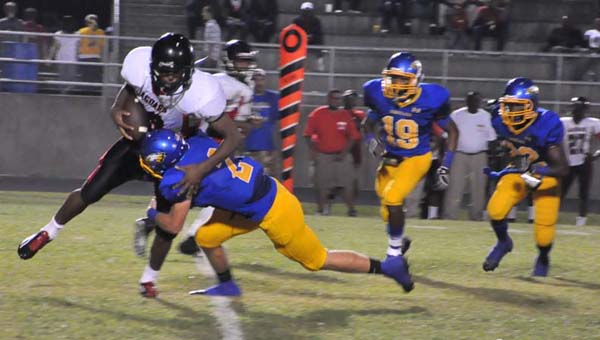 The W.S. Neal Eagles rushed their way to a 38-17 drubbing of the Hillcrest Jaguars Friday night at home to improve to 4-1 this season.

The Eagles racked up 411 yards on the ground with big nights coming from backs Marquese Banks and Quinton Samuels. The running tandem totaled 302 yards on 28 carries and five touchdowns in the 21-point win for the Eagles.

“We played hard and we played physical, and Hillcrest is a very physical team,” W.S. Neal head coach Doug Hoehn said. “They have a lot of team speed, but we made a lot of mental mistakes. We made more on offense than we did on defense, but it is still a lot of mental mistakes that we can’t do as a football team. The kids just played awful hard and played their guts out tonight and that is how we were able to get the win just on sheer will and effort. But we have to clean up our mistakes.”

Hoehn said he challenges his team to rack up the rushing yards.

“I think we have been averaging around 400 yards a game this year,” he said. “We challenge them to rush for 400 yards. Quinton is a good ball carrier. He is a good athlete and he is only a freshman. We hope we can be able to game plan him a little more as we go on. Malcolm Hawthorne is another good one that we hope to game plan more as we go on. They are just young kids that are just starting with us. I am proud of our kids’ effort. I am proud that we are 4-1. We just have to clean up our mistakes.”

From there, Hillcrest got a safety and returned the kick 67 yards for a touchdown to take a 9-8 lead over the Eagles.

Four plays into the fourth quarter, the Eagles scored their final touchdown of the night to take a 38-9 lead with 10:25 left in the game. Hillcrest added a late score to cut the lead to 38-17 with 9:05 left in the game, but W.S. Neal was able to hang on for the win.

The Jaguars totaled 152 yards in the loss with 66 rushing and 88 passing. Hillcrest had 55 rushing yards in the first half and 18 passing while getting 11 yards rushing in the second half and 68 passing.

Along with Banks and Samuel’s big nights on the ground for W.S. Neal, Trevor Burns added 58 yards on nine carries. Josiah Nettles had 42 yards on 14 carries.

W.S. Neal will be back in region play next week at Excel. Game time is set for 7 p.m.