BMS students: ‘We can show who we are’ 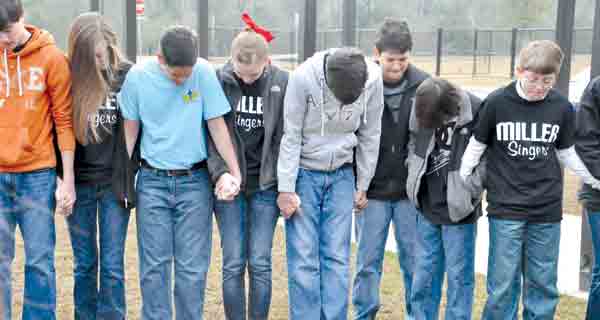 For the second year in a row, students of all ages from every grade at the school, all races and denominations, join hands every Tuesday and Friday morning at 7:25 a.m. to pray together before the school day begins.
“Breann Huff (who is now at T.R. Miller) started this last year,” Randy Winton, who supervises the group, said. “I don’t remember the exact time frame. It could have been at the start of the year, but I know it was started by ‘See You at the Pole,’ which is the third Wednesday of September usually.”
What started at the school’s flagpole, but has since seen a change in location, “Pause at the Pole” is a twice-weekly prayer meeting for students.
“It started out by the flagpole but some issues about safety came up with the buses coming and going in that area so we had to move it to another area,” Winton said. “With this move, we have had more kids so it is a good place. If I were a parent and I am pulling up with my kid and I see a circle of kids out there praying, I would feel pretty good about it.”
Winton said he was asked by Brewton Middle School principal Carrie Brown and counselor Sherry Hutto to oversee the group along with other youth ministers from the Brewton area.
“They have teachers, and they have to be really careful with what they do, so Ms. Brown and Ms. Hutto asked for a couple of youth ministers in town to help out,” Winton said. “Terry Rowell, from Appleton Assembly, wants to be part of it and I have been part of it as well.”
Students involved with the Pause at the Pole, meet in a grassy area near the school. They join hands and make a circle and share in devotion before ending with prayer. One student will start the prayer and it continues all the way around with those wanting to pray being able to pray.
“If you don’t want to pray, we definitely don’t want to pressure anybody,” Winton said. “We know that prayer definitely does not mean praying out loud. I know some of them pray silently. That is fine. We just want to give them a chance to be encouraged and see others. I know as a kid to see others because you might be shy, or just a little nervous, we have seen kids that would not even hold hands at the begging of the year, now praying. If you get encouragement from your peers bolder in their faith, it might help others.”
While serving as a youth pastor at Brewton’s First Baptist Church and as a father to three boys at the school who participate in the Pause at the Pole, Winton said “it is the best” to see this kind of event taking place.
“That is part of what makes Brewton unique,” Winton said. “When I was youth pastor in Chattanooga up in Tennessee, this would not happen in those towns. The neat thing about this is this did not come from a youth minister — they did this on their own. You see a lot of kids who obviously have parents who have taught them the importance of prayer.”
Winton said it’s obvious the praying students at Brewton Middle School are doing it for the right reasons.
“They are not doing this for show,” he said. “They are sincere about it. If it was for show or started to become a big show, I would shut it down because that is not what it is about. I think the kids would shut it down, too, before I would because it means something to them. I have heard people ask them about this and why they do it or what is it and if they can come to it. As a youth minister, when you hear your kids from church pray, it is not a general prayer. It means something. They think it through and they are obviously developed in their prayers. They pray deeper than some adults.”
Eighth grade student Caleb Winton said one reason he and his classmates wanted to continue what Huff started last year was to leave their mark at the school.
“Last year, Breann started this and we figured as eighth graders, we needed to be leaders and carry it on and  leave our legacy at the middle school,” Caleb said.
Maggie Rowell said the Pause at the Pole lets her and her classmates show who they are outside of school.
“It is also just a great way to just show people, not only by just walking the halls, but you can show who you are every morning,” Rowell said. “We can show who we are and come out here and worship God.”
Randy hopes the event will continue.
“I want to thank Ms. Brown, Ms. Hutto and Ms. (Madalyn) Cave for being very supportive of this and allowing the kids to have this opportunity,” Randy said. “They are leaving a legacy. Hopefully they can carry it on to the high school and the students who will still be at the middle school next year, will keep it going on here.”