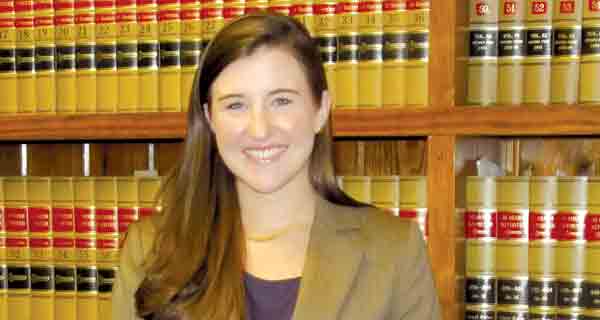 Kaitlyn Griffin Jones is the newest member of the team of attorneys at a local lawfirm.

Kaitlyn Griffin Jones is the newest attorney added to the staff at Otts, Moore, Coale, Godwin and Sterns Law Office. After completing her education and passing the bar, she is now working part-time for the law firm and also part-time for the Escambia County District Attorney’s office.
“I have always had an interest in the practice of law, but I think I really made the decision to study law on Law Day where local seniors get to attend court and be the jury on a case every year,” Jones said. “We were in a real courtroom and discussing a real case. It was very exciting.”
Jones was born in Birmingham, but her family returned to Brewton when she was in the sixth grade in 2001. Her grandfather, Billy Joe Griffin, was the administrator at D.W. McMillan Hospital, and her father followed in his footsteps, now serving as administrator of the hospital.
“I was a good student at T.R. Miller High School,” she said. “School was not hard, but I did have to study. I was a cheerleader and was always involved in the Student Government Association.”
She graduated from T.R. Miller High School in 2007, and received a double major degree in public relation and political science from the University of Alabama in 2010. She followed up with law school at the University and graduated in December 2012. She passed the bar in April and came back to Brewton to practice.
“I had interned in several places and was able to intern in the Escambia County District Attorney’s office last summer,” Jones said. “I thought I was more interested in criminal law but working at the law firm I have found that civil law is very interesting. I don’t know what I may do in the future, but right now I am still learning.”
Jones met her husband, Bobby, in college and they were married in March. He is from Mobile and they live in Brewton. Her husband is a representative for a furniture manufacturer. Her mother, Robin, is a nurse at Brewton Elementary School and she has two younger brothers, Christopher, who is 23, and Zachary, who is 17 and will be a senior this year.
“I don’t know exactly where I am headed,” Jones said. “Right now I am trying to figure it all out. I’ll just see where it all goes. I want to have a family some day, but not right away.
“It’s exciting to be out of the books and actually be in a courtroom because I love being there,” she added. “In the meantime, I am learning to like civil law working with things such as estate planning and divorces.”