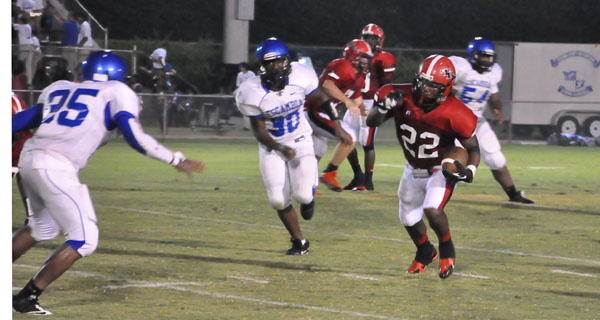 By JOSH BEAN
For The ASWA

Fort Dale Academy’s Chip Taylor did something remarkable in Friday’s 32-26 victory over Escambia Academy.
Taylor suffered a dislocated finger in the second quarter, according to the Montgomery Advertiser, and left the stadium to visit a local hospital. He missed the entire third quarter, but returned for the fourth. And then the fireworks really began.
After Escambia scored with 1:28 to play to take a 26-20 lead, Taylor scored on a 76-yard run with 52 seconds remaining. Escambia fumbled away the kickoff, leading to a 36-yard TD pass from Taylor to Ryan Burkett.
Finishing with 211 yards rushing and throwing the game-winning touchdown pass, Taylor’s performance makes him this week’s ASWA Offensive Player of the Week.
The two other finalists for the award also wrote storylines worthy of a Hollywood script writer. Lauderdale County’s Zack Simbeck rushed for 177 yards and scored two touchdowns in a 34-12 win over Wilson just two days after the death of his mother. Simbeck scored on a 50-yard run and a 16-yard pass reception.
Berry’s Terrance Hollingsworth accounted for five touchdowns in a 32-28 win over Northside. He scored on runs of 1, 7 and 4 yards, had a 97-yard kickoff return, and threw a 25-yard TD pass to Weston Bonner.
The Defense/Special Teams Player of the Week is McGill-Toolen’s Tony Bridges. He returned a kickoff 87 yards for a touchdown and returned an interception 64 yards for a game-clinching, fourth-quarter TD in a 49-35 victory over UMS-Wright.
The finalists were Hartselle kicker Jake Waterman and Priceville’s Ben Patterson. Waterman kicked two field goals, from 43 yards and the 20-yard game-winner, in a 14-11 overtime victory over Hillcrest-Tuscaloosa. Patterson scored touchdowns on a 55-yard punt return and a 77-yard kickoff return in a win over West Morgan.
ASWA members from Albertville, Anniston, Birmingham, Brewton, Decatur, Demopolis, Dothan, Fort Payne, Florence, Gadsden, Grove Hill, Huntsville, Jasper, Mobile, Montgomery, Oneonta, Scottsboro and Tuscaloosa submitted nominations this week.
Other standout performances from this past weekend:

DEFENSE/SPECIAL TEAMS
Tranealius Abrams, Blount: Intercepted three passes in the Leopards’ 44-0 win over LeFlore.
Mason Brown, Glencoe: Finished with 14 tackles (two for a loss), a sack and a fumble recovery in the Yellow Jackets’ 29-12 victory over Westbrook Christian.
Blake Devine, Southside-Gadsden: Returned a kickoff 91 yards for a touchdown and ran for a 95-yard score in a victory over Hokes Bluff.
Willie Ezell, Stanhope Elmore: Pulled in two of Stanhope’s four interceptions in a 48-7 win over Marbury.
Morgan Finley, Madison County: Booted a game-winning 33-yard field goal on the final play of the game to lift the Tigers past East Limestone 24-21. He also drilled a 27-yarder early in the fourth quarter.
Logan Hamlett, Madison Academy: Took a fumble back 41 yards for a touchdown in the Mustangs’ 48-6 win over Tanner on Thursday night. He also scored on a 36-yard catch and a 6-yard run.
Madison Hendry, Sumter Academy: Had 13 tackles in a 47-0 win over Meadowview Christian.
Darnell Jackson, Piedmont: Rushed for 117 yards on five carries and scored two TDs (10, 85 yards) in a victory over Cherokee County. Jackson also recovered a fumble on defense.
Jeremiah Jones, Bessemer City: Recorded 3 sacks in a 60-20 victory over Sumter Central.
Adrian King, Lee-Montgomery: Had two interceptions in a 34-7 loss to Wetumpka.
Ben Kirby, Valley Head: Finished with two interceptions and six tackles as the Tigers won 20-12 at Donoho. He also threw a 74-yard TD pass.
Josh Lewis, Crenshaw Christian: Made seven tackles, including a sack, and forced two fumbles in a 43-10 win over Chambers Academy.
Nick McCallister, Providence Christian: Recorded 19 tackles, including two for losses, and combined with two other players to stop a game-tying two-point conversion with 13 seconds left to help preserve a 35-33 win over New Brockton.
Jared McClure, Good Hope: Returned a punt 77 yards for his first of four touchdowns in a 61-14 victory over rival Holly Pond. McClure also scored on an 80-yard screen pass from Sebastian Fendley and runs of 25 and 4 yards.
Cole Murphy, Gaylesville: Murphy returned an interception 40 yards for a touchdown with 59 seconds to go in the game to lift Gaylesville to a 40-39 victory over Cedar Bluff.
Alvin Murray, Midfield: Recorded 10 tackles and 3 sacks in a 12-6 victory over Wenonah.
AJ Nicholson, Red Level: Had 10 tackles (6 for a loss), 1 sack a 19-13 loss to Choctaw County Friday night.
Ben Patterson, Priceville: Scored on two returns – 75 on a kick and 55 on a punt – as the Bulldogs beat West Morgan 48-35 on Thursday.
Tyler Rogers, Mobile Christian: Returned an interception 55 yards for a touchdown in Mobile Christian’s 42-0 rout of St. Luke’s. Rogers also ran for 144 yards.
Dee Smith, Florence: Had an interception, a fumble recovery, a sack and a pass breakup in Florence’s 28-7 win over Gadsden City.
Tyler Smith, Slocomb: Recorded 13 tackles, three for losses and one for a sack, and had a fumble recovery in the Red Tops’ 26-0 shutout of Rehobeth.
Desmon Turner, Fort Payne: Returned two punts for touchdowns, 76 yards and 64 yards, and caught a 30-yard TD pass in Fort Payne’s 46-0 victory over North Jackson.
Bratcher Underwood, Houston Academy: In addition to hitting a 35-yard field goal and 3-of-3 extra points in a 32-22 win over Geneva, he punted for a 42.6 average on three punts that went inside the 15 (14, 5 and 1 yard lines) and kicked all six kickoffs into the end zone.
Mac Wilson, Carver-Montgomery: Had three sacks and recovered a fumble in a 20-7 victory over Prattville at Cramton Bowl.
Zac Witcher, Good Hope: The senior defensive end had two sacks and a caused fumble in a 61-14 victory over Holly Pond.