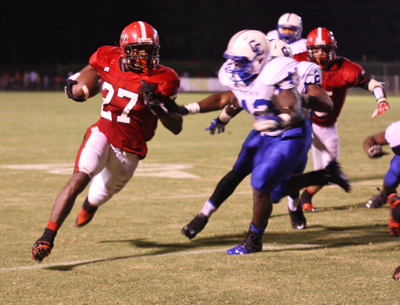 Coming off a huge win against Region 1 rival Bayside a week ago, T.R. Miller head football coach Jamie Riggs and his coaching staff walked onto the practice field Monday afternoon with one thing in mind: challenge their Tigers to step it up a notch.

That might sound crazy after such a huge win, especially since the Tigers were about to play a non-region game for the first time in nearly a month. But it doesn’t sound so crazy when one considers Clarke County is next on the schedule.

“I don’t care what the overall series says, and it doesn’t matter if this was a region game or not, we knew we had to prepare for a Clarke County team that always plays hard and always plays physical,” said Riggs. “And we as a coaching staff were pretty intent on pushing our players and challenging them throughout the week leading up to the game.”

It obviously worked. Behind an offensive line that at times pushed around Clarke County’s vaunted defensive front, and behind a physical defense that spoiled Clarke County’s efforts from both the shotgun and the Wing-T, the Tigers rose to the occasion. They jumped out to a 27-6 lead, and never looked back en route to their eventual 47-19 win at Brewton Municipal Stadium Friday night.

In doing so, Class 3A’s third-ranked team moved to 5-0 on the season. But it didn’t come without a certain amount of grit and determination against a traditionally physical Bulldog team.

“I was pleased by how we responded to them physically,” said Riggs, whose team now holds a 31-3 advantage in this series. “We made some nice plays early on offense and stopped their running game in the first half.”

And, as always, it all started up front in the trenches, where guys like seniors Ashton Wilson and Zach Whitworth, and juniors James Peach, Hunter Harp and Ronald Young paved the way for their team’s 419-yard offensive attack. Nearly 300 of those yards came in the running game, where Dominique Jackson led all rushers with 176 yards, so the work of this group of offensive linemen – which also included junior Chris Jones and sophomore Jake Najor – can’t be overlooked.

“We challenged them pretty hard all week,” said line coach Eddie Brundidge. “We challenged them to work hard on preparing for the tough stuff because we knew that Clarke County’s big and physical defensive line was going to present us with our biggest challenge of the year so far. But we took the opening kickoff and needed just six plays to cover about 60 yards to score and take the lead right away. That was a big win for these guys and they did a great job for us tonight.”

So efficient was the work of the offensive line, that the Tigers’ first four scoring drives took six plays, eight plays, one play and nine plays and each drive averaged 53 yards. In the process, they converted on 6-of-8 third down situations.

After the opening drive, which culminated in a Keion Smith one-yard sneak, T.R. Miller’s defense forced a three-and-out, and its offense promptly tailored an eight-play, 63-yard drive that ended when Jackson scored the first of his two touchdowns, on a six yard run. With two scoring drives behind them, the Tigers had already amassed 118 yards rushing in just five minutes of game time.

Another Bulldog punt opened the door for the Tigers. After the punt was returned to the 28-yard line, Smith connected with sophomore Chardian Johnson on the first play for a touchdown. Johnson then kicked his third PAT of the night and the Tigers led 21-0.

When Clarke County scored on the ensuing drive, T.R. Miller charged down the field in nine plays, covering 68 yards. Kameron Coleman scored from three yards out to make it 27-6 at the half.

As Clarke County tried to make it interesting, cutting the deficit to 27-12 on their first drive of the second half, again T.R. Miller answered with a one-play, quick strike when Smith found Kellyn Winn behind the defense and lofted a perfect pass for the 64-yard TD. From there, Jackson added a 14-yarder and sophomore Ahmaud Taylor went in from 25 yards out to close out the scoring.

“It always feels good to be 5-0 at this point in the season,” said Riggs. “But we still have a lot of work to do and have some areas where we need to improve. But we’re working hard during the week and playing real hard on Friday nights. So I’m certainly proud of where we are right now.”

The Tigers will return to region play next week, when they travel to Cottage Hill.