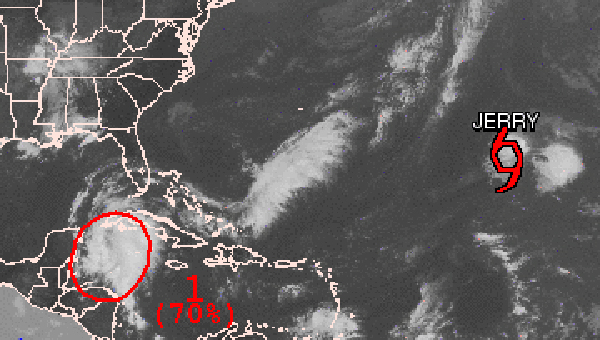 The storm has a good chance to turn into a tropical storm, according to forecasters.

“This low is moving slowly to the northwest and should enter the Gulf of Mexico tonight or Thursday morning,” he said. “Early models have a very wide variation on paths in northern Gulf, from central Louisiana to central Florida. The National Hurricane Center currently gives the storm a 70 percent chance to develop into a tropical storm. Hurricane Hunter aircraft will fly the storm this afternoon and if a center of the system can be located, a better forecast model can be developed.”

“Rainfall could be 3 to 5 inches with locally higher amounts,” he said. “Small stream flooding may be possible and flash flooding may occur. Winds may reach 30 to 40 knots, but should be mostly along the coast.”

Adams cautioned that it is still too early to have a strong idea on the forecast, so things could change before the system reaches landfall.

But he urged residents to have plans in case the storm heads this way.

“Take a few minutes to review your emergency plans and your emergency supplies, just in case,” he said. “Please stay tuned to your local radio and TV stations and your weather radio for changes and forecast updates.”

Jim Westland, a meteorologist at National Weather Service in Birmingham, said the system is something the NWS is watching, but is not overly concerned with at the moment.

“It’s really nothing to talk about yet; it’s not even a named tropical storm,” Westland said. “Right now it’s just an area of disturbed weather in the Caribbean that we are watching closely.”

Westland said he has heard reports a weather reconnaissance airplane would be traveling through the storm within the next day or two to collect information about the system’s strength and direction that can’t be more accurately detected through ground-based or satellite monitoring systems.

“This systems is being continuously monitored because it could change its behavior in a matter of just a few hours,” Westland said.

While the storm currently lacks the winds of a hurricane — or even a tropical storm — Westland said there is a chance that this system could bring rain to the region during the upcoming weekend.

“I wouldn’t call it a likelihood, but there is a chance that even if it doesn’t develop as a tropical cyclone that it will spread moisture into the northern Gulf and perhaps into Alabama. If it remains disorganized and continues to track this way, it looks like the moisture would get to our region most likely on Sunday,” Westland said. “Even if it doesn’t develop as a tropical storm, this will be a rainmaker any way. So people should pay more attention to flooding concerns than wind concerns.”

Jay Sowers of The Selma Times-Journal contributed to this report.