Local residents will have a chance to do their part to “stamp out hunger” in the annual event sponsored by the National Association of Letter Carriers in conjunction with the postal service this weekend.

The event, which is held to help feed families in all 50 states, will be held Saturday, May 10, said local mail carrier Dewayne Burnham.

“This is a really great thing for our community,” Burnham said of the event where residents are asked to fill bags of non-perishable items such as canned meats and fish, soup and beans are suggested, as well as peanut butter, juice, pasta, canned vegetables, cereal and rice.  Bags will be distributed this week, Burnham said.

“Many people don’t think about the need to feed hungry locally, but it’s here,” he said. 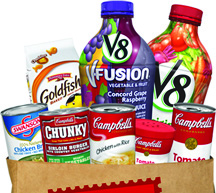 Non-perishable items are needed as donations.

Food drive organizers ask that glass containers and items beyond their expiration dates not be included in donations.

Those wanting to participate may place their donations in bags provided by the USPS at their mailboxes on Saturday before the letter carrier arrives with the day’s mail.

Burnham said donations will be collected as long as the goods are placed in bags and placed near the mailbox.

“Which means, if you miss Saturday to donate, don’t worry,” he said. “We’ll pick up your bag as long as it’s by the mailbox.”

100 parcels to be sold Thursday