While in Brewton Monday, Gov. Robert Bentley fielded questions ranging from a new lottery attempt to health care to the state of education in Alabama.

Bentley made the visit to Escambia County, which also included a visit to Flomaton, as part of his “Road to Economic Recovery Tour.”

Bentley designed the tour to discuss local economic conditions and state-level efforts to attract more jobs to Alabama. While in Brewton, he dined at Acapulco’s, the city’s newest Mexican restaurant, before meeting a group of 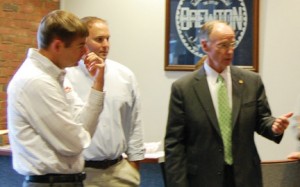 “We’re concentrating on small businesses right now,” Bentley said. “There are a lot of resources for small businesses. You just don’t know where they are. We’re putting together an office and a website that will be operational soon that you can talk directly with a person if you have a problem.”

“We would have been out of this recession two or three years ago if it had not passed,” he said. “With its 50 person cap, it keeps businesses from adding new employees. With its unknown costs, it keeps investors from growing businesses.”

Bentley also discussed the Marketplace Fairness Act, which allows states to require online and out-of-state retailers to collect sales and use tax.

“Right now, brick and mortar businesses, like you all, are at a 9 percent disadvantage,” he said. “This is a job killing issue. You can’t compete with Amazon and the like who charge 9 percent less and offer free shipping.

“We need that passed so we can compete fairly,” he said.

Bentley said he doesn’t believe the federal government should tell an employer how much to pay someone.

“As long as you don’t hire children and pay people whatever they’ll work for,” he said. “I don’t think the government should be in the business of setting wages.”

As for the lottery, Bentley did not take a public position on the subject; however, he said he is “for the people’s right to vote” and that if the measure does pass, money raised should go to the general fund, not for scholarships.

“I trust the people,” Bentley said. “If it does pass, it should go to something that benefits all people in the state. It’s not something that should fund government. That’s jobs, but I’ll never go against the people’s right to vote.”