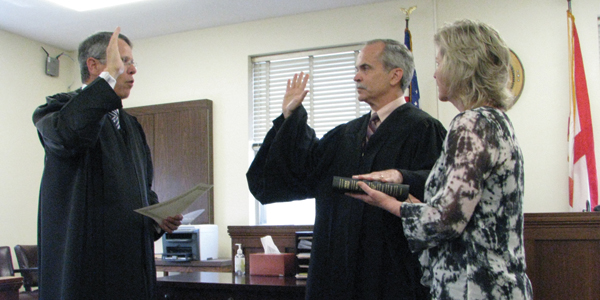 Bentley appointed Dave Jordan to fill Byrne’s seat. For the last 11 years, Jordan served as one of the county’s two district judges. Brewton attorney Jeff White was tapped to serve the remainder of Jordan’s term.

Jordan assumed the bench in 2003, filling the expired term of Judge Gordon Batson. He successfully ran for office twice for the six-year term.

“I’m thrilled and honored to have gotten the opportunity to serve the people of Escambia County,” Jordan said. “I’m aware of the gravity and great responsibility that comes with the position. It’s a challenge and an honor to have it. I look forward to working even more for the people of this great county.”

Jordan said he plans to “build on the great foundation laid by Judge Byrne.”

He was sworn into office earlier in the day with his wife, Becky, by his side. Byrne officiated the ceremony.

White began practicing law in 1995 with Earnest, Ray and White and until Tuesday, served as an assistant district attorney.

White said he applied for the position and was honored to be chosen for the post.

“I decided to submit my name because I thought I could serve the people of Escambia County more,” he said. “I feel I have a broad knowledge of all aspects of the law, and I have served my country in Operation Desert Storm and Operation Iraqi Freedom. This is my opportunity to serve this country that I love.”

Byrne ended a nearly 30-year career Tuesday and was honored with a retirement reception at the courthouse. More than 150 people – including past and present county drug court attendees – attended the event. Byrne was honored with kind words and many gifts during the afternoon reception.