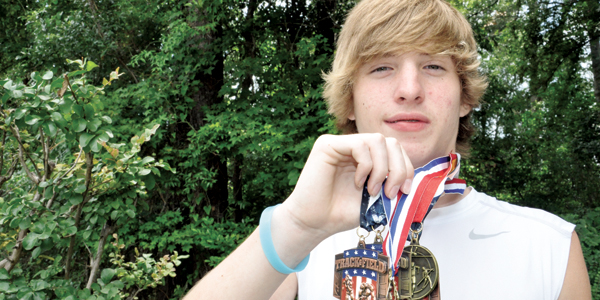 While his ultimate goal is to be in the Olympic games one day, a local resident will get his chance to run in the AAU Junior Olympics in Des Moines, Iowa, in the coming days.

Joshua Gunter, 15, of Brewton, will run in the event at Drake Stadium on the campus of Drake University starting Monday.

“Lately, I have just been training for the Olympics,” Gunter said. “I have had a minor setback recently after I strained my hamstring. I am doing track events like the 100-meters, the 200-meters and the triple jump.”

Gunter is a member of the Wings Track Team in Pensacola, Fla., and it’s through that involvement that he qualified for the upcoming Junior Olympics.

“The Wings team is a community team,” he said. “I finished sixth in the finals out of 100 runners. There are about 50 people on my team, and I am one of two from the team to make the Junior Olympics. It feels pretty good to be competing in this event.

“I have always been really fast and I just wanted to take it somewhere,” he said of the sport. “I like traveling the country and I wanted to see if I could make the Olympics. It is a big thing and I just want to put my talents to use.”

Gunter said for him, it’s “the rush” he gets before a race or a particular event.

Gunter is the grandson of Jack and Mary Cain of Brewton and Jo and Joyce Gunter of McDavid, Fla. He is the son of Carl and Wanda Gunter of Brewton.

Gunter, who is a rising sophomore, said he wants to take it easy before the Olympics and rest his hamstring.

“We will leave Friday, and I will run Monday,” Gunter said. “I want to say thanks for all the support I have received from my coaches, family and friends.”