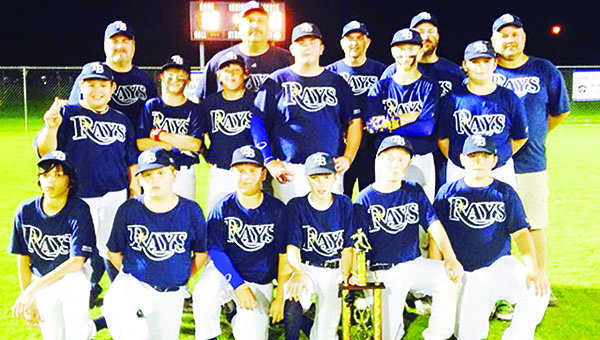 The East Brewton Rays won the city championship Thursday night as they defeated the Orioles 10-0.
Isaac Smith pitched a one-hitter for the Rays to lead them to the win.
Smith went all four innings on the mound and allowed one hit and struck out eight.
While Smith pitched the Rays to the win, at the plate, Jacob Bondurant and Jordan Crane both had inside-the-park homeruns.
Bondurant had two RBIs and also had a single in the win. Crane also had a single. Smith added a single and two RBIs while Dustin Godwin had two RBIs. Taylor Watson finished with a double for the Rays in the win.
Gavin Leggett added three singles while Cole Driskell added a single.
In the win, the Rays scored four runs each in the first two innings and added two more in the fourth to get the 10-run win.
Both the Rays and the Indians finished with five wins each, but the Rays won the head-to-head to claim the championship.
No stats were known from the Orioles
***
The East Brewton Indians doubled up the East Brewton Orioles 14-7 in recent action in East Brewton. The win moved the Indians to 5-6 overall this season.
Leading the Orioles 5-3 after one inning and 6-3 after two innings, the Indians used an eight-run third inning to build a 14-3 lead.
The Orioles closed the gap with three runs of their own in the third inning and one more in the fourth; however, the Indians took the win by seven.
Jordan Sims pitched in the win for the Indians as he went four innings and allowed seven runs on eight hits, walked one, hit two and struck out four.
At the plate for the Indians, Sims had one hit, two RBIs and one stolen base while Tyler Brooks added a hit and one RBI.
Samuel Bosarge finished with a double and a triple and three RBIs. Bosarge also added one stolen base.
Devon Spencer had a double, one RBI and one stolen base for the Indians while Colin Stinson finished with a double and one RBI.
No stats were known for the Orioles.

Brewton Blue Jays 14, East Brewton Indians 1
The Brewton Blue Jays’ Devin Smith and Kyle Blevins teamed up to pitch a one-hitter as they led the Blue Jays to a 14-1 win over the EB Indians.
Smith was the pitcher of record for the Blue Jays as he went three innings and allowed one hit, one earned run, walked five and struck out six. Blevins went the final inning and struck out two.
At the plate, the Blue Jays pounded out 10 hits.
Jaxson Flores led with three hits and three RBIs. One hit was a triple. Earl Dolohite added two hits and one RBI with one hit being a triple.
Wyn Brittain finished with a hit and one RBI while Will Adams added a double and one RBI.
Peyton Rowell finished with one hit and Smith had a triple and one RBI.
Mac Baxter added one hit and two RBIs in the win while Tristan Capers added one hit and one RBI.
For more coverage of the week’s earlier games, visit brewtonstandard.com.

No other stats or game information from league games were known as of press time.