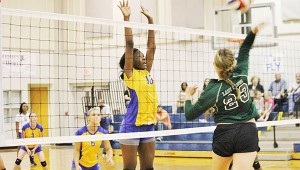 Dinah Samuel protects the net in Tuesday’s game against Flomaton.

Volleyball coach Jason Blaney believes his team is making strides with each match and knows communication is key for his team to make the next step. “Flomaton is a great team that is well coached,” Blaney said. “ Karissa and Madison had huge service games for us. We still need to work on our communication. Every match we are getting better and that’s what we are striving for.”

The loss will drop Neal’s record to 1-6.