W.S. Neal entered Friday night’s game against the UMS-Wright Bulldogs undefeated 3-0; however, the Eagles would leave Cooper stadium with its first loss of the season. In a region game Neal would lose to the number one 4A ranked Bulldogs 21-45.

Neal head football coach Doug Hoehn said some mistakes down the stretch made it harder on the Eagles to mount a comeback late.

“The game was more competitive than what the score reflects,” Hoehn said. “We made some turnovers towards the end and [UMS] was able to get some distance.

“Our kids played hard. Turnovers hurt us in the second half and you can’t win a football game that way.”

After both defenses kept opposing offenses scoreless in the first quarter, Neal was able to break into the score column first on a one yard touchdown run by senior Dakota Graves. The Bulldogs would answer with a six minute drive resulting in a two yard touchdown run by junior running back Michael Matthews, one of his three of the night. The Bulldogs would score again before the half on a 56 yard run by quarterback Tanner Allen. Neal would go into the second half down 7-14.

With 8:41 left in the third quarter, the Bulldogs would score on a five yard run by Matthews to make the score 7-21. With its first possession of the second half, Neal marched down the field inside their opponent’s five yard line. Neal would score on a one-yard run by senior running back Malcolm Hawthorne to bring the team within a touchdown. With its next possession, the Bulldogs would drive down field quickly resulting in a one yard touchdown run by Matthews. 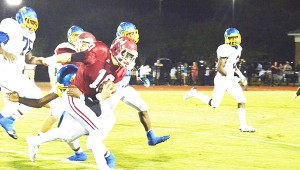 A host of Eagles work to bring down a UMS-Wright player.

With 10 minutes to go in the fourth quarter, the Bulldogs would score on an 18-yard pass and extra point to extend the lead 14-35. Neal would turn the ball over on offense at midfield.

The Bulldogs would score another touchdown on a 52 yard quarterback scramble by Allen. He would rush for 164 yards for the night. The Bulldogs would get the ball back quickly after an Eagles mishap on special teams.

The Neal defense would  force the Bulldogs to settle for a field goal after getting the ball with good field position. In need to score points quickly, Neal quarterback Jacobey Hawthorne hooked up with Malcolm Hawthorne for a 78-yard touchdown pass. After an  extra point, the Eagles drew closer to 21-45. In desperation mode, Neal would attempt an onside kick. After a couple of bounces the Bulldogs were able to pounce on the ball to give Neal their first loss of the season and in regional standings.

Coach Hoehn said he liked how his team made adjustments in the second half but needs to do better with costly mistakes.

“Our  kids play hard,” Hoehn said. “They play hard every week. We had to make some major adjustments defensively in the first half.

“I think we did a better job at that in the second half,” he said. “We moved the ball well on offense but missed on clock management in their redzone. We just made some mistakes at the end of the game and we can’t do that.”

Leading Neal on offense was Malcolm Hawthorne with 116 total yards and two touchdowns. Neal had two fumbles late in the game. Neal’s defense allowed 347 rushing yards and 52 passing yards on the night.

Neal will play in its homecoming game against Calhoun (0-5) this Friday. Kick off is at 7 p.m.