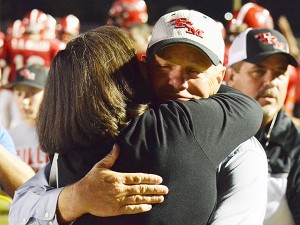 Coach Riggs and his wife, Becky, share a moment after Riggs milestone night.

Some of us know of the achievements: four state championships, 67 playoff wins, and Alabama Sports Writers’ three time coach of the year.  The playoff wins are the most in state football history. This past Friday TRM head coach Jamie Riggs added another achievement. He became the fourth coach in the state of Alabama to reach the 300-win mark.

Riggs is in his 30th season as a head coach. He served three seasons as the coach of Opp before joining the T.R. Miller Tigers in 1989.  Riggs would achieve his first win with Miller against Escambia County, the same team he would defeat 26 years later to reach 300.

Riggs credits a lot of the coaches of his playing and early coaching years for his success today.

“When I was in high school I got a chance to play with three different coaches that were all outstanding,” Riggs said. “My first coach was Mack Wood. He taught me about the toughness of football. Another guy I played for was named Larry Rampey. He taught me about the importance of building confidence in players. The third coach is Frank Cotton. He was a great motivator. I had a really good background because I played for these men. When I started coaching early on, one of my high school assistant coaches that I got to work with later, Larry Mickwee, taught me about organization and he was a very positive guy. He always stressed the importance in having a positive attitude. I worked as an assistant for head coach Mike Sasser starting in 1983 to 1985. He taught me a lot about how to manage a game and keep your cool. All of these coaches were successful in everything they did.” 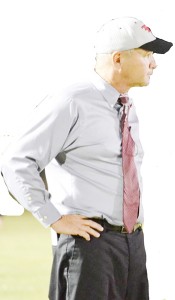 Friday night Coach Riggs became the fourth coach in the state of Alabama to reach the 300-win mark.

With any great feat comes sacrifice in oneself and the loved ones around. Riggs says his family has always supported him through the good and tough times. “There are some good and not so good times,” he said. “A lot of times when the kids were growing up I would come home at night around 7 or 7:30 and spend sometime with  them, but they’re in bed around 9:30. Then I’ll start working at the house for about two to three hours at night to get ready for the next day. It’s kind of a never-ending process. The hours are so great that your family has to support you or it will be very difficult. My wife has been a great support. A lot of times I would be gone and she would take care of things around the house.  Sometimes things didn’t get done around the house until after football season.”

Riggs understands the pressures on his family being a football coach. “It’s not always great to be the coaches’ wife. When things are going good and your winning everyone is happy. When its not it can be difficult but we understood the territory when this all started. That part hasn’t been awful for us but it is challenging at times. You got to have your family support you. It’s more of a way of life than a job because it affects my entire family with the hours and things that transpire.” After a moment to capture the essence of the journey Riggs adds, “Overall, looking back at it now, I think we’re glad we did it.”

Riggs says the enjoyment of coaching the players and for his alma mater keeps him going. “ I have always enjoyed the spirit of the players and the school. I feel obligated to give my best effort everyday. Football is about relationships: players, coaches, officials and parents. I do it for those reasons.”

Riggs says he doesn’t know how long he’ll keep coaching. “Every year I take a look back at the past year,” he said. “I ask myself ‘Is it the best thing for me to come back and coach? Is it the best decision for my family and myself? Is my health okay?’ When you get to my age you do things a year at a time.  I know the day will come but it hasn’t come yet.”