TRM squares off against Pike County 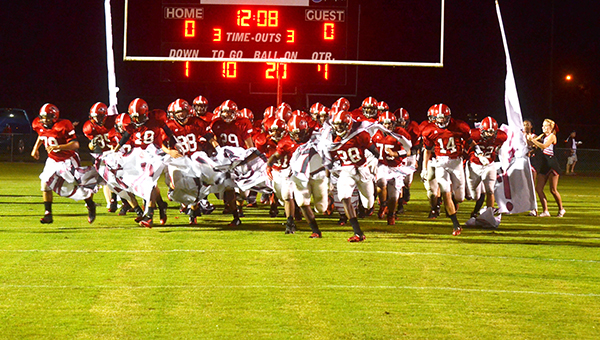 TRM will host Pike County in the second round of the playoffs.

The T.R. Miller Tigers will face off against Pike County today in round two of the class 3A state playoffs.

The Tigers are coming of a 67-16 win in the first round in which the offense accumulated 461 total and the defense held its opponent to 264 total yards, forcing three fumbles and two interceptions.

Pike County is coming off a 14-6 victory over Aliceville. All points scored in the game by Pike County were in the first half via a fumbled kick return and a 12-yard run by senior tailback Deshon Cowling. Cowling led the team offensively with 139 rushing yards and the one touchdown. This season Pike County is outscoring opponents 417-48.

“(Pike County) is extremely fast – especially their two tailbacks,” Riggs said. “They’re going to get the ball to them.

“There are times the offense will spread out and get in shotgun to throw the ball. They have some great speed at receiver,” he said.

“(Pike County) is explosive,” Riggs said. “They’ve made a lot of big plays on other teams. They do a really good job with kick returns.”

Riggs said the team’s defense forces turnovers – and a number of other moves to create plays.

“They do a lot of good things to win games, so this is a game we have to play really well to give ourselves a chance to win,” he said. “This is the playoffs so everybody you play here on out is going to be good. We have to be ready to play.”

Pike County has a strong, athletic defensive line, Riggs said. He said the TRM team has been really tested upfront throughout the entire season.

“We’ve seen a good number of really good defensive linemen this year than we have seen in awhile, and Pike County has two or three guys that fall into that category,” he said. “They’re quick, strong and do a really good job using their hands to get off the block to attack the ball. So we have to find some answers to their defensive line. “

The last time TRM and Pike County faced of was back in 2005. Overall Pike County leads the match up 6-8.

Kickoff is at 7 p.m. at Municipal Stadium.

The 2015-2016 basketball schedule is set for T.R. Miller. The regular season begins for the girl and boy’s varsity teams... read more