New signage has been installed in an effort to reduce traffic accidents at the intersection of Ala. Hwy. 41 and U.S. Hwy. 31.

“What (state officials) said is that rollover signs have been installed adjacent to the signal coming from 41 to 31,” Lovelace said. “They also studied alternate routing patterns for trucks to avoid this movement all together, but there would be some significant impact to our traffic if that option is taken.” 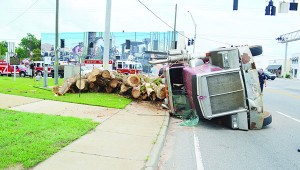 State officials said all traffic would have to be routed strait through the intersection to turn on the backside of the theatre and connect back to U.S. Hwy. 31 via Persimmon Street.

“They said this option would involve building additional signals and could be a significant impact on Brewton traffic,” Lovelace said of the review’s determination. “State officials said they then looked into the option of using leveling to correct cross-slope to improve this situation, which would be the best option and an expensive one.”

Lovelace said no monies have been allocated to cover the estimated $150,000 project.

“ALDOT said they are planning to include these improvements on the next resurfacing project, but this work is currently two to three years away,” he said. “But they assure us they plan to look into options for moving this project forward.”