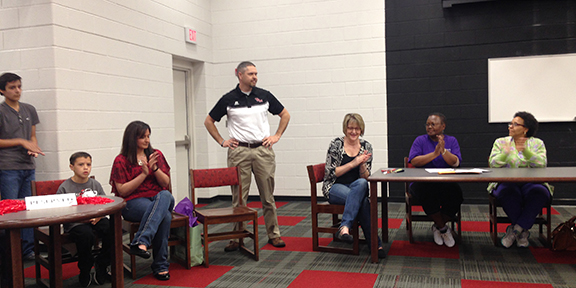 New TRM head coach and athletic director Andrew Thomas addresses the crowd at Wednesday’s board meeting while his wife, Angel (left), and board members Stephanie Walker, Ola Ball and Regina Watson look on.

A reception to welcome the family was held just after noon Wednesday at TRM.

“This is an exciting day,” said Superintendent Dr. Kenneth Varner. “We said in the beginning we wanted someone who was a proven winner; who had integrity and character, and I think we have accomplished that.”

Thomas, who in his five-year career at THS boasts a 60-5 record with two state championships, brings with him a wife and four children. He spent the afternoon meeting staff and his new team.

“I am excited about the opportunity to be here at T.R. Miller,” Thomas said. “It’s an honor in itself to follow Coach Riggs. You can’t replace someone like him, but I can say I plan to do three things during my time here in Brewton.

“One, I will continue the tradition of turning our guys into Miller men,” he said. “Two, to win championships. I won’t talk about my career, but I will say I’ve spoiled myself. I’ve got expectations.

“And thirdly, I want to kill an Alabama deer,” he said in closing.

Thomas said the Brewton community reminds him of his hometown, where, like here, Georgia Pacific is one of the main employers.

“This is a big move for our family,” he said. “But, we’re used to this type of community. TRM checks off all the boxes for us.”

Thomas will assume the new role on April 1.

Learning how it all works