Joyner to take next step

Sophomore Jefferson Davis Community College pitcher Tyler Joyner is moving on to the next level after graduation to play for the University of North Alabama.

“His decision to attend the University of North Alabama is exciting for everyone who knows him and his family,” said JDCC head baseball coach Darrell Blevins. 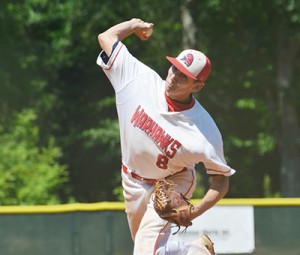 “Even before he joined our program as a scholarship student-athlete, we knew this young man had a chance to be something special. He has been a very important piece in our program over the past two years.”

Blevins said Joyner has been a hard worker ever since he joined the Warhawks.

“(Joyner) never took anything for granted and worked everyday to get better,” Blevins said. “He used his time everyday, whether it was on the field at practice, in the weight room or during our early morning conditioning periods to better himself for our level of competition, while at the same time maintaining his dream of playing at the next level.”

Blevins said Joyner has been an exceptional student off the field maintaining a grade point average above 3.8.

“He spent the time and effort necessary on his academics to be successful at our college which in turn helped him be even more attractive to four year institutions and their programs,” Blevins said.

“I think he can see now how important those efforts were in helping him achieve his dream.”