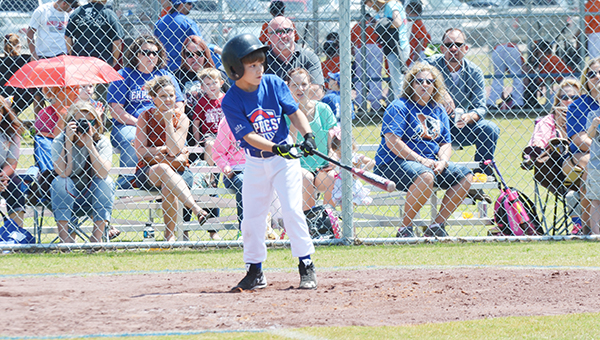 Corey Williams | The Brewton Standard
A hitter on the Express team hits a ball to the outfield for the inside the park home run.

The Brewton and East Brewton Little League got in full swing this past Saturday with opening ceremonies and on the field competition.

Dujuan Maxwell got the start on the mound for Orioles and picked up the win.

The Cubs jumped out ahead 3-2 after the first inning. The Cubs scored one run in the second inning.

The Cubs were successful in putting the ball in play in an error filled game by the Orioles.

Iman Jones was 2-for-4 with a triple and two RBIs for the Cubs.

Daniel Todd was 2-for-2 for the Orioles.

Kade Peter picked up the win for the Cubs.

The Yankees scored first when Nathan Pate rounded the bases off a single by Walker Hoomes. The Rangers responded quickly with three runs in the bottom of the inning.

After the Rangers added a run in the second inning, the Yankees plated three runs in the third. The Yankees added two runs at the top of sixth to take a 6-4 lead and held the Rangers to only one run at the bottom of the inning to win the game.

Jordan Crane was the winning pitcher for the Yankees. Gavin Leggett was 2-for-3 with a double and RBI. Crane, Pate and Jordan Tolin each had a hit and two stolen bases.

The Yankees scored three runs in the first inning and six runs in the second inning. Gavin Leggett was 1-for-3 with a double, RBI and three stolen bases; Jordan Crane was 2-for3 with two RBIs and two stolen bases. Nathan Pate had two hits and an RBI. Cole Driskell and Alex Alvarez had a double.

Caleb Peters had an RBI single for the Rangers.

Walker Hoomes and Leggett combined for the win. 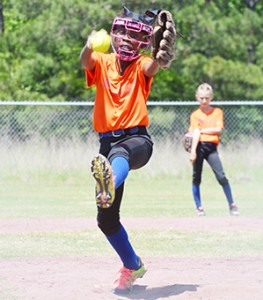 Corey Williams | The Brewton Standard
Precious Howard of the Orange team pitches on Saturday. Howard had seven strikeouts in the game.

Both teams were able to manufacture a high run total.

Precious Howard was the winning pitcher for the Orange with 10 strikeouts.

Precious Howard had seven walks and seven strikeouts against the Orange.

Haleigh Gideons was 2-for-2 at the plate with two singles for Silver. Jada Godbolt had a hit.

Ashli Wyatt was the losing pitcher, giving up 12 runs on five hits, five walks and a strikeout.

Jailyn Bondurant picked up the win allowing two runs on one hit and three strikeouts.

Both teams matched the other with five hits.

Kendall Carpenter was 2-for-3 at the plate for Royal. Jailyn Bondurant, Teresa Harris and Emily Steele had a hit.

Bondurant picked up the win from the circle, allowing three runs while striking out three batters.