No. 5 Miller beats Cottage Hill in first round, will play No. 4 Bayside Academy 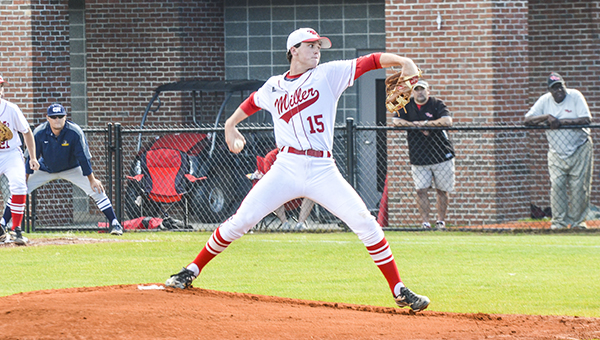 Corey Williams | The Brewton Standard
Miller’s Jo Jo Booker pitches in game one. Booker had 10 strikeouts in the win.

TRM head baseball coach Kevin Madden said he was very proud of how his team competed, especially in the pressure situations.

“We got big hits when we needed them,” Madden said. “I think we were one hit away from busting it open even more. We made plays in the field that were huge. The pitching was wonderful tonight. We pitched ahead, we made pitches to get out of situations when (Cottage Hill) had runners in scoring position with nobody out. I’m extremely proud of our kids.”

A dazzling performance on the mound by Jo Jo Booker and a three-run fourth inning propelled Miller in the win.

Miller got on the board with a run in the third inning off a sacrifice fly to right field by Tripp Floyd.

In the bottom of the fourth, Miller scored its second run on a double to left centerfield by Jason Konsler. After a single by Joshua Winton, Drew Williamson singled to score Winton. Williamson later scored on a single by Oneil White. 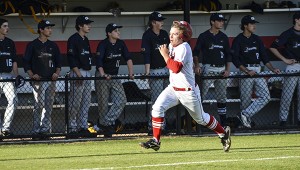 Booker went the distance on the mound, allowing no runs on four hits, three walks and 10 strikeouts.

Cottage Hill jumped out early with two runs via an RBI single by Zac Stokes and pass ball at home plate to score Evan Moseley.

Kept relatively quiet thru two innings, Miller finally got the bats going at the top of the third inning with an RBI single by Hunter Brittain. Two batters later, Jo Jo Booker singled in a run. Next at bat, Jason Konsler singled to right field to score Booker. 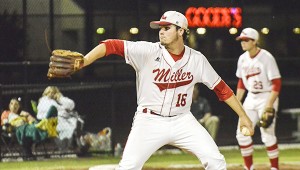 Corey Williams | The Brewton Standard
Tripp Floyd pitches for Miller in game two. Floyd had six strikeouts in the win.

Leading 4-2 in the fifth inning, the Tigers added a run after a single by Tripp Floyd. Miller scored again later in the inning on a fielder’s choice to extend its lead, 6-2.

The game was called in the sixth inning due to rain.

The Tigers were eliminated from the first round last year by Cottage Hill. Madden said it was important for his team to stay focused.

“We’re not competing against an opponent,” Madden said. “We’re out here competing against ourselves. Our focus is to play the game like we have all year long and to do the little things that got us here. I thought we had a good week of practice. Hopefully we can build off this win and continue the momentum deeper into the playoffs.”

The Tigers will face Bayside Academy at home on Friday. Game time is at 4 p.m.

Fishers of Men will have first Legacy Tournament April…