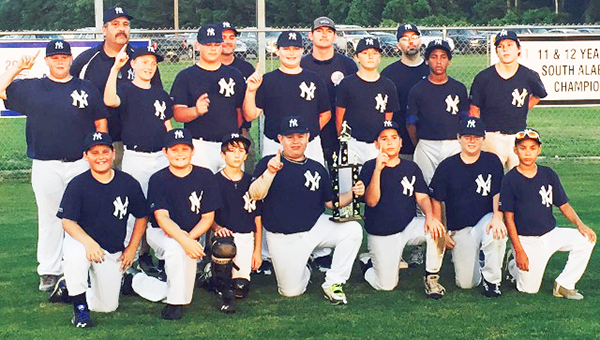 Courtesy photo
The Yankees after its win.

The East Brewton 12U Yankees swept the Rangers in a double header to take home first place in the division. In the double header the Yankees had 24 hits, scored 18 runs and allowed seven runs.

Walker Hoomes led the Yankees at the plate with two hits and two RBIs. Jordan Crane was 1-for-3 with a double and an RBI. Nathan Pete was 2-for-3 with two doubles and three RBIs.

Crane pitched the complete game in the win for the Yankees, allowing two hits, three walks and fanning six batters.

Jordan Crane was 2-for-2 at the plate with two doubles and two RBIs to lead the Yankees. Dustin Godwin had a hit and two RBIs. Gavin Leggett had a double and two RBIs.

Alex Alvarez, Jo Jo Sewell and Leggett combined on the mound for the win. Alvarez surrendered two runs on two hits and struck out one. Sewell gave up two runs on one hit. Leggett tossed 1/3 inning and gave up no runs.