Will run for District No. 2

Dale Yoder of Brewton has announced his intent to seek the office of Brewton City Council District No. 2 seat.

Yoder is a businessman who began his own business 20 years ago and of which he has handed over to his son. 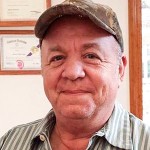 “I feel that my experience in business management will give me the insight needed to address the issues of the residents of the City of Brewton,” Yoder said. “I recognize the city’s efforts for improvement but would like to add to those efforts in ways more suitable for the residents.”

Yoder said as a business owner, he’s learned that the key to success is customer satisfaction and listening to the wants of the people.

“If elected, I’d like to make changes that would benefit both the young and elderly alike, and I plan to be available to the residents of not only District 2 but also the city as a whole.”

Yoder and his wife, Glenda, have two children, Ginger Simmons and Shannon Yoder and two grandchildren, Addison and Kennedy Yoder.

Simmons is a graduate of Huntingdon College with a degree in business management and has been employed with Trustmark of Brewton for 16 years and currently holds the title of Commercial Relationship Manager.

The couple’s son, Shannon, has now taken over the family business and is co-owner of Yoder Properties with his father.