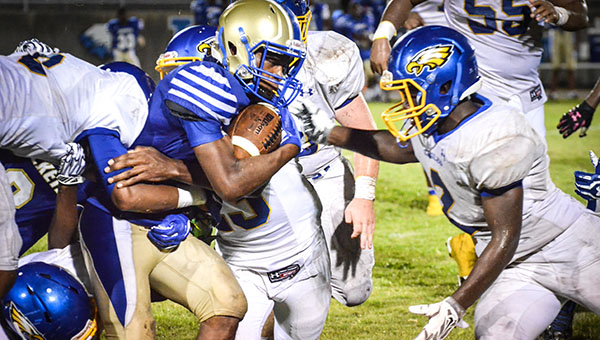 It was a back and forth battle on Friday night between the W.S. Neal Eagles and Aliceville Yellow Jackets, but in the end it was the Eagles who were able to march down the field, 75 yards to take a go ahead 33-28 lead on a one-yard touchdown run by Peyton Salter. The Eagles capitalized on the two-point conversion to take the lead 35-28, which served as the final score of the game.

Though the Eagles pulled out the win, the offense had five fumbles, which led to four touchdowns by Aliceville. The Eagles had only one fumble last year, up until the playoffs. Neal head coach Doug Hoehn said the problem will be addressed moving forward into next week’s game in Tallassee.

“(Fumbling) is something we haven’t done here in a long time,” Hoehn said. “But the kids who played were facing their first experience in this environment. Their effort was great. Their attitude was great. We have to learn from this. It’s hard to win a ball game with five turnovers.”

“I thought the kids played hard,” Jackson said. “We executed play calls for the most part and pursued the ball well. We have to do a lot of cleanup on our special teams going into the season. We have to be more consistent on offense and defense. W.S. Neal has a good team. I thought we played well for three quarters until late in the game when we brought our young players in. We’ll address these things and work on them to get ready for our first game.”

Aliceville was first to jump on the board with a 16-yard touchdown run by Nicquavious Craig. The Yellow Jackets failed on the two-point conversion to take a 6-0 lead. Less than two minutes later, Neal quarterback Jacobey Hawthorne scored on a nine-yard run. The Eagles missed the extra point making the score, 6-6. It wasn’t long before Hawthorne found the end zone again on a quarterback sneak to give the Eagles the lead. With the added extra point, Neal led 13-6 at the end of the first quarter.

With 6:22 to go in the second quarter, Aliceville’s Demontez Hinton carried the ball up the middle for a five-yard touchdown run. Aliceville converted on the two-point conversion to take a 14-13 lead.

On the ensuing kickoff, Hawthorne did it with his feet again, taking the ball to the end zone for an 88-yard return for the touchdown. A failed two-point try gave the Eagles a 19-14 lead. Aliceville quickly responded with another touchdown run by Hinton, and a two-point conversion for the 28-19 lead at the half.

Aliceville tact on another touchdown with a 42-yard pass from quarterback Santiago Taylor to Javon Phillips in the third quarter.

In the fourth, Neal was able to hold Aliceville scoreless while scoring touchdowns on a 3-yard run by De’Ron Smith, and the go ahead lead touchdown by Salter.

Leading the Eagles was Hawthorne with 161 total yards and three touchdowns. Smith had 23 carries for 113 yards and a touchdown.

Leading Aliceville was Phillips with 114 receiving yards and a touchdown. Hinton had 10 carries for 31 yards and two touchdowns.

Neal had seven penalties compared to Aliceville’s nine for the game.

Hoehn said there are still questions for skilled positions but the game was a good test in moving forward with sorting those questions out throughout the week.

“I’m sure the butterflies were churning around a little bit for a bunch of the players,” he said. “(Aliceville) is very athletic and they were tough. I’m proud of our young guys in the end. To punch it in for the win, I was glad to see that. The mistakes that were made wasn’t physical but mental on their part. This game should help them out a lot. Their eyes were big and they were excited.”

Now that was a welcome, wasn’t it?