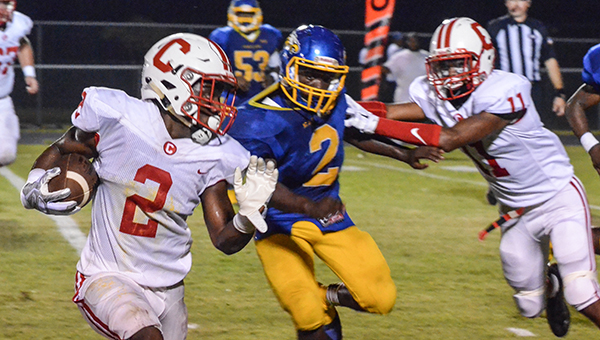 The W.S. Neal Eagles suffered its fourth loss of the season after falling to undefeated Carroll 21-0 on Friday.

C.J. Roberts had a big game for Carroll rushing for 112 yards on 12 carries, including a 4-yard touchdown run in the second quarter.

Carroll also scored on an 8-yard catch by Tyler Benton from quarterback Alex Reeves; and a 10-yard run by Mazue Martin in the third quarter. Martin had 44 yards rushing for the game.

Leading Neal was Jonathan Gantt, Peyton Salter and Marvin Maddox, who were among the leaders in tackling on defense.

Neal was held to 25 yards of total offense for the game. Carroll had 254 total yards.

“(Carroll) is the best team we’ve seen all year,” said Neal head coach Doug Hoehn. “They’re the most athletic, biggest and most physical by far. I was very happy up front with our offensive and defensive line. (Carroll) had some speed. We knew that coming in. They tried to get to the edges on us and they had a little success with that, but all and all I am proud of our kid’s effort. That’s a very good football team we faced. This game is going to make us a better football team moving forward.”

Neal falls to 1-4 for the season, while Carroll improves to 5-0.