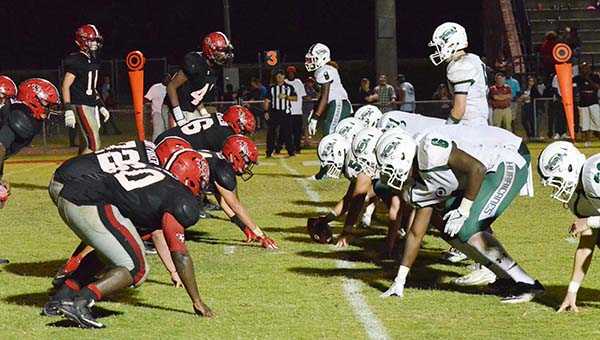 Corey Williams | The Brewton Standard
The Miller defense lines up against Flomaton on Friday.

It wasn’t the prettiest game from either team, but the T.R. Miller Tigers can count Homecoming Week as a success after defeating the Flomaton Hurricanes 35-21.

Flomaton scored first in the opening quarter on a quarterback sneak by Haydon Hammond. Flomaton’s choice to go for two points paid dividends when Hammond found Da’shun Odom in the endzone to give the Hurricanes an 8-0 lead.

The Tigers answered back on the ensuing drive. Quarterback Caleb Winton got to the outside on a quarterback keeper for a four-yard touchdown. A bad snap forced the Tiger PAT no good. Miller trailed 8-6.

The Tigers didn’t wait much longer to score again. Runningback Michael Campbell showed great vision behind some excellent blocking for a 54-yard touchdown run. The Tigers converted on the two-point conversion to take a 14-8 lead.

The Flomaton defense got the Hurricanes back in the game with a clutch play by junior Antionio Hayes. Hayes read the eyes of Winton and jumped an attempted pass for the interception. He returned the interception for 31 yards for the touchdown. The Flomaton PAT was blocked by the Tigers, leaving the score tied 14-14.

With 2:48 to go in the second quarter, Campbell broke free again for a 14-yard touchdown. Kicker Matthew Morgan added the PAT to give the Tigers a 21-14 lead.

With 9:30 to play in the third, senior Terence Hall carried the ball for an 11-yard touchdown run. Morgan added the PAT, extending the Tiger lead to 28-14.

In the fourth quarter Campbell continued his stellar night with a six-yard touchdown. Morgan added the kick to give Miller its largest lead of the night at 35-14.

Flomaton added a touchdown with three minutes to go in the fourth quarter via a three-yard run up the middle by Odom. Odom added the PAT for Flomaton to make the score, 35-21, which held as the final.

Leading Miller was Campbell with 26 carries for 253 yards and three touchdowns on the ground. The past three games dating back to Tallassee Campbell has had 47 carries, for 538 yards and seven touchdowns.

Miller ran the ball 82 percent of the time on offense. Head coach Andrew Thomas said part of it was the blitzing skim by Flomaton, but most of it was the confidence in the Tigers running game.

“We’re a running team,” Thomas said. “We got to go to our strength which is our offensive line. We weren’t too comfortable in our play action pass protection and we didn’t want to put ourselves back in distance with sacks. We knew we could control Flomaton upfront and we did that well.”

Thomas said his team has to clean up on the mistakes moving forward.

“There are moments where we’ve just been too sloppy,” Thomas said. “We put our defense in bad situations tonight. We made some good negative plays on defense but we didn’t tackle well at times. That being said I thought upfront we did some good.” things.”