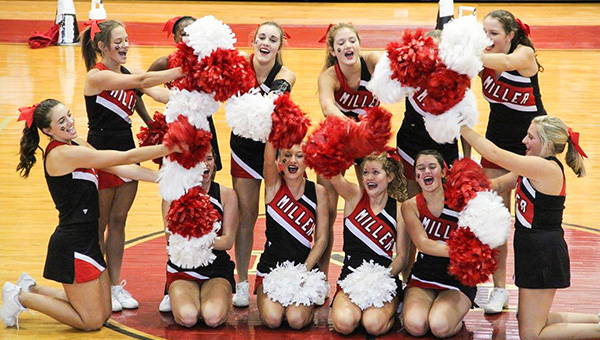 The T.R. Miller Cheerleading team will bring its spirit and talents to its first cheer competition on Nov. 5 at the Cheer Up Charity Cheer Challenge at the Brewton Middle School. The competition will host teams from surrounding areas coming together to raise food for the local food pantry.

“We’re trying to have the teams and people who attend to bring food for the local food pantry here,” said cheer trainer and coordinator of Cheer Up Scott Perry.

“At all our competitions, we try to do something for the community or some kind of charity. Some people like to drop off canned goods and can’t necessarily stay for the competition. That’s fine too. We’ll get it to the food pantry.”

The competition comes at a good time for the TRM cheerleading squad who will also compete at the AHSAA state competition in Montgomery on Nov. 19. This year is the first year TRM has competed in competition outside of cheer activities for school sporting events.

TRM cheer coach Becky Edge said the competition this Saturday will be the first time the squad will tumble on a full floor.

“I’m surprised how far we’ve come,” Edge said. “I have no worries of them tumbling. Sometimes when they’re building, I’m a little apprehensive, but their tumbling I’m confident. They are great tumblers.”

TRM cheer captain Mary Allison Peace and co-captain Tori Sims said they are nervous but also excited to see how different competitive cheer has evolved when the team competes this weekend and in state competition later this month.

“What we did was different type of routine styles,” said Peace. “So I want to see how it’s different in the AHSAA version of the competitive cheer that we will do.”

The training this year has been different for the TRM cheer squad. The team was hard at work this summer at the All-Star Academy in Brewton founded by Perry and co-trainer and spotter Josh Williamson. Both helped the team get ready to make the transition into competitive cheer.

“(TRM) has a lot of talent,” Perry said. “That’s what we got to get going in this area. I’m sure it’s a lot of kids here who have talent. We just have to get them a place to train. (TRM) found (All-Star Academy) right away. They’re tumbling has definitely improved.”

Now the team is fine tuning its routine.

“At the beginning of practice we do tumbling to warm up,” Sims said. “Then we go through all the stunts. Then we put it all together for the routine.”

Edge said the move to competitive cheer this year was to give the cheer team a chance to showcase its talent.

“We have really great cheerleaders,” Edge said. “In every organization we have whether it be academic or athletic there’s a competition you can go to prove and show what you learned. Our majorettes compete, our band competes. Everybody competes. Our cheer leaders have never done that. I just think it’s time for them to go out and show what they can do.”

Edge said looking down the road a few years from now she looks at cheer as an AHSAA sanctioned girls sport at the school.

“I believe it’s moving that way,” said Edge. “At least half of our girls have done competitive cheer. That’s something that was announced prior to tryouts. They knew that my goal was to make two or three competitions this year.”

Saturday TRM will perform but not place since it’s the hosting team. On Nov. 19 in state competition the team will be judged on skill as well as crowd participation.

“It’s about a full out routine like tumbling and tumbling passes,” Sims added. “It uses more high school material. The other competitions outside of AHSAA are more dance focused.”

Edge reiterated that competition is based on high school cheer.

Beginning time for the Cheer Up Charity Cheer Challenge at BMS is at noon this Saturday. Admission is $5.

Everyone attending and competing are asked to bring perishable items to go to the local food bank.