A man of many talents

Charlie German is a man of many talents. He is in no danger of being bored because he keeps so busy all of the time. In addition to running his own lawn care business, he works with Keebler, stocking the shelves at WalMart with cookies and crackers.

Perhaps he draws most of his enjoyment working with kids. He drives a school bus and volunteers with baseball and football. 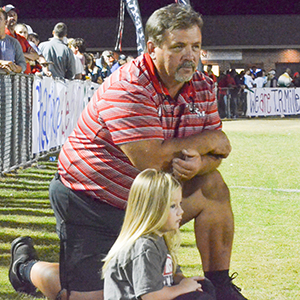 Corey Williams | The Brewton Standard
Charlie German, with his granddaughter, is pictured on the TRM sideline.

“I love kids and I guess that is why I am so involved with them,” German said. “I drive a regular school bus route, but as there is a shortage of drivers, I get called on for lots of extra trips, such as the trip to take the elementary school students to Holland Farms, and I drive the band bus to the out-of-town games.”

He also has a few cows that takes some of his attention. Several years ago he looked after the cows belonging to the Northcutt family and they paid him with calves to the point that he now owns eight of his own.

“I really love to look after them,” he said. “There are not a lot to work with and I like to take care of them a lot.”

German was born in Houston, Texas, but his grandparents lived here in Brewton. They ran a convenience store on St. Nicholas Avenue and he got his start in the grocery business there.

He moved to Brewton when he was a small boy and graduated from T.R. Miller High School in 1981. He was very active in sports and later attended Pensacola Junior College, where he played baseball. He had to drop out of school when his father had a massive heart attack.

“He was a brick layer, and although I didn’t really have the skills, I took his place so my mother would continue receiving a check,” German said.

“I also went back to Texas and worked in the oil fields for a while. I then moved to Chattanooga, Tenn., and lived there for the next 10 years. I worked in several grocery stores and finally went to work at a Winn Dixie.

“I also met my wife while I was in Chatttanooga,” he said. “When the company wanted me to go to be trained to run a store, I decided not to do it and returned to Brewton.”

After he and his family moved to Brewton, he started his lawn care business and called it Woodlawns Lawn Care after the place his mother lived in Houston.

Today, he continues with that business and has two or three other people working for him.

“I also went back into the grocery business in a way,” he said. “My wife works with Nabisco and knew that Keebler was looking for someone to stock its brands in WalMart. She travels around with her job, but I only work this one WalMart.”

He has also opened and managed several Fred’s, and, by the way, is an umpire. He and his wife have two children and four grandchildren, including a brand new one.

“I have one little granddaughter, Carley, who lives here and she spends a lot of time with me,” he said. “She and I are really close. I also have grandchildren in Tennessee that I don’t see as often.