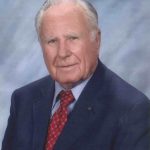 He was born in Brewton Oct. 2, 1923, to Pearlie H. and Josie (Golden) Williamson. He was drafted into the U.S. Navy in 1942 and served honorably until 1946. After his service to his country, he married Mary Elizabeth Killingsworth Sept. 27, 1946. He graduated from Alabama Polytechnic Institute, now Auburn University with a degree in mechanical engineering in 1951.

After his graduation, he worked with the DuPont Corporation in Camden, S.C. from 1951 to 1956 before moving to Chemstrand/Monsanto in 1956 retiring in 1982 as the plant engineer. He was a longtime member of the Cantonment Rotary Club and the Elks Lodge 2108. In 2000, he received his 50th year pin and certificate from the Auburn Masonic Lodge 76, his home lodge where he was a member for 66 years.

In 1956, he and his family joined the Gonzalez Baptist Church before moving their letters to Fist Baptist Church in Pensacola. Among many hobbies he enjoyed were fishing, hunting, golfing but most of all his Auburn Tigers football.

He was preceded in death by his parents; his brother, Marshall Williamson; his sister, Josie Pearl Barnes and a nephew, Edwin Allen Tisdale.

She was a native of Parker Springs, Ala., and a life long resident of Brewton. She was a member of the Brewton First Baptist Church where she was active in the Adult and Happy Hearts Choir, Glad Hearts Sunday School Class, and a member of the Rebecca Everage Star Womens Missionary Group. She was a homemaker.

Mary Liza Coker McCrory, 84, of Tallahassee, Fla., passed away Thurs., Dec. 1, 2016, in a Pensacola medical facility after a brief illness.

She was a native of Conecuh Co., and a former resident of Jay, Fla., before moving to Brewton. She was a member of the North Brewton Baptist Church, a graduate of Lyeffion High School and a retired bookkeeper from Jay High School with more than 20 years of service.

She was preceded in death by her husband, C. F. McCrory; a son, Mark Wayne McCrory and a sister, Hazel Brantley.

Lige Earl Overstreet, 80, of Bradley Road, passed away Thurs., Dec. 1, 2016 in a Pensacola, Fla., medical facility after a brief illness.

He was a native and life long resident of Escambia County. He was of the Baptist faith, a 1953 graduate of W.S. Neal High School, a U.S. Army veteran and a retired lab tech from Jefferson Smurfit with 39 years of service. He enjoyed hunting, fishing and woodworking.

He was a native and life long resident of Brewton, and was a member of the North Brewton Baptist Church. He was a U.S. Army veteran, having served in WWII, and a retired carpenter that was employed for many years with Norsworthy Construction.

He was preceded in death by three brothers, Robert Lee Smith, Frank Smith and Aubrey Smith; and one sister, Frances Craddock.

Bruce Ray Linzy, 76, of Hwy. 4, passed away Tuesday night at his residence.

He was a native and life long resident of Jay, Fla., and was a member of the Jay First Baptist Church. He was a 1958 graduate of Jay High School, and a former lineman with EREC. He enjoyed classic and antique car collecting especially Fords.

Memorial services will be held at a later date.

She was a native and life long resident of Escambia County. She was of the Holiness faith, attended W.S. Neal School, was the circulation manager for The Brewton Standard for 12 years, and was a retired machine operator from Monsanto with 30 years of service.

She was preceded in death by her parents, J.C. and Meadie Baker King; and a son, Jr. Simmons.

Memorial services will be held at a later date and time with Williams Memorial Chapel Funeral Home directing.

She was born in Indianapolis, Ind. Her family has resided in Brewton since 1900. She had been in continuous residence in Brewton since 1970, coming from Pensacola, Fla. She was a member of the T.R. Miller High School class of 1973 and was a graduate of the University of Alabama.

She was a member of the Alabama Alumni Association, Delta Delta Delta Sorority and Brewton Church of Christ.  She was a teacher with the Brewton City Schools for more than 30 years.

She was preceded in death by her father, Lieutenant Commander James M. Heffernan, and her step-father, Ray M. Sherer.

The family kindly requests that flowers be omitted in favor of contributions to some of the charities that were important to her, e.g., Alzheimer’s Association, alz.org, American Cancer Society, cancer.org, and St. Jude Children’s Research Hospital, stjude.org.

He was born Oct. 14, 1950, to Jesse (“Jack”) and Edna (m. Dyess) Hammonds (both deceased). He was a lifelong resident of Evergreen, and was a member of Mt. Zion Methodist Church, in Lyeffion.

He was a beloved teacher and administrator. He earned his bachelor of science from Troy State University in 1973. He went on to earn a master of science degree in administration and supervision from Livingston University in 1977. He began his career in education in 1972 and served in various teaching and administration roles in the Conecuh County public school system, until his retirement in 2001. Since, he has happily held the position of Headmaster at Sparta Academy. His love for education, his staff, and his students came second only behind his love for his family.

He is survived by his wife, Michelle Lister Hammonds of Evergreen; two sons Chad (Amy) Hammonds of Fairhope, and Terry Wayne Hammonds Jr. of Atlanta, Ga.; his daughter Ashley (Cameron) Hammonds Askew, of Helena; and his stepson Taylor Harrelson, of Evergreen. He is also survived by three sisters, Ruth (Ray) Lynch of Mobile, Laura Wilson (Walter Wayne) of Jefferson, and Sherry (Wayne) Sims of Andalusia.

He is preceded in death by his parents; his three brothers Billy (June) Hammonds, Bobby Hammonds and Benny (Linda) Hammonds; and his sister Earlene (Fred) Stucky.