A Brewton teen has been jailed Thursday in conjunction with the December robbery of the Diamond South convenience store. 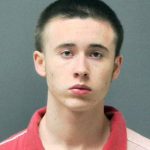 Seth Jennings, 17, is charged with first-degree robbery after he allegedly entered the store on Dec. 21, brandished a firearm and demanded money, Sgt. Brian Wesley of the Brewton Police Department said.

Despite Jennings’ age, he was charged as an adult based on the “seriousness of the crime,” Wesley said.

“This case remains ongoing, and anyone with any information is asked to contact the Brewton Police Department,” Wesley said.

Jennings was taken into custody without incident and booked into the Escambia County Detention Center. Wesley thanked his fellow BPD patrol officers and the Department of Corrections’ K9 Unit for their assistance.