‘If he’d threatened my family, I would have killed him’

An early morning home invasion Sunday nearly turned deadly after a homeowner held the suspect at bay until law enforcement could arrive.

Joshua Watson, his wife and their five children were inside their Phil Road home when the couple heard the piercing sound of breaking glass at 1:59 a.m.

“I knew exactly what was happening,” Watson said. “I grabbed my gun and ran to the living room. That’s when I saw him inside on the floor. I told him, ‘Get down or I’m going to kill you,’ and he complied.”

Watson’s wife dialed 911, and within minutes, Escambia County Sheriff’s Office deputies were on scene and 37-year-old Robert Ryan Delgadillo was in custody. 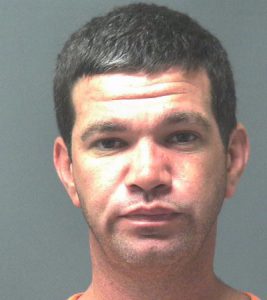 Chief Deputy Mike Lambert praised the couple’s quick actions.
“Kudos to them,” Lambert said. “They were diligent and awake enough to know what to do. Things could’ve ended very badly for the bad guy. As the homeowner, (Watson) would’ve been justified in using deadly force.”

Lambert said deputies recovered a knife from inside the home believed to belong to Delgadillo.

Watson said the situation was “scary after the fact.”

“I didn’t know that man’s intent,” Watson said. “I knew that it was my duty to protect my family at all cost. He picked the wrong house. He was trying to tell us that there were three men outside after him. I called my neighbor to come over with his shotgun to see if there was anyone outside, and there wasn’t.”

Watson said he wouldn’t have hesitated to take action if the situation escalated.

“He was between me and my two son’s bedroom, but if he had pushed me or threatened my family, I would’ve done it,” Watson said.

Delgadillo is charged with first-degree robbery and is currently being held in the Escambia County Detention Center under a $50,000 bond.