The tale of Flomaton train robbery

As Alabama and Florida emerged from the dark days of the War Between the States the Reconstruction era cast a shadow across the region that was just as foreboding as the war years.

During this era, armed bands of men roamed the rural areas of the region and threatened the lives and property of the beleaguered citizenry. Conditions were so bad that officials in Escambia County Florida begged the Reconstruction state government for troops to restore order but little changed in the early days after the war. 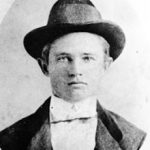 Peter Enfinger was 99 years old in 1954 when interviewed by The Pensacola News Journal about conditions in 1865.

“I remember when the Joe Sanders’ gang used to come through Freeport-they drew out a five-gallon jug full of syrup from our barrels in the smoke house and then busted the barrels with an axe. I started to cry and rave about it and one started to hit me with his gun belt.”

The Sanders’ gang was one among many outlaw gangs that roamed the region. A general feeling of lawlessness sometimes permeated throughout the area. Fred McKinley once commented that things were so bad in Perdue Hill, Ala., during the early 1900s that a man had to take a shot-gun with him to church and store it beneath the buck board of the wagon. During this by-gone age, more than a few outlaws crossed our area.

Other than Rail Road Bill, who later killed Sheriff McMillan from Brewton, few local outlaws struck more fear into the heart of men in these parts than Rube Burrow.

Burrow was a wanted man in the 1890s. After a stint of crime stretching from Texas, through Arkansas, and into Alabama the outlaw had a $7,500 price tag on his head when he planned his Flomaton train raid of Sept. 2, 1890. Prior to making the daring raid, Burrow had executed a will in Brewton in August that had his estimated worth around $50,000.

On Sept. 2, Burrow was on the northbound L&N as it was approaching Flomaton. As engineer Bob Sizer turned to the coal box he was faced by two shooting irons held by a masked gunman with a cold look in his eye. The Burrow plan was now in motion.

Burrow ordered the train to stop on the trestle on Big Escambia Creek. As Sizer obeyed the command, his fireman made a daring attempt to flee into the woods near the track. As he disappeared into the pine thickets the sound of hot lead from Barrows revolvers echoed into the woods behind him.

Burrow ordered Sizer to break into the express car from the outside. Sizer, a God-fearing man who loved his family and who wanted to return to them sooner than his Maker; yelled to the express messenger not to shoot and as the train employee opened the door. Burrow next placed a revolver to his nose. Burrow thereafter seized the gun of the conductor, John Elliot, and ordered the men to fill his bags with cash and vouchers. Immediately afterwards Burrow bolted from the train and the pursuit was on.

Sheriff McMillan from Brewton was informed that Burrow was hold up at his hideout along the Yellow River below Milton, Fla. McMillan went to Milton and raised a posse only to find that the outlaw had not retreated to Northwest Florida.

Burrow, a man pursued, was now a lone rider in a strange land. Bloodhounds had struck his trail northwest of Flomaton and informants put Burrow route of escape deep into Monroe County.

John McDuffie, an acquaintance of Burrow, was employed by the Southern Express Company to capture the outlaw. McDuffie and his associates, armed with weapons and fresh mounts, tracked Burrow through Monroe County with great efficiency. McDuffie, a Monroe County farmer, knew the area well.

The men reached the store of Jefferson Davis Carter who recognized Burrow from a picture presented to him by McDuffie. Carter informed the men that Burrow had bought food in the store only an hour before.

McDuffie and his men knew they were near their adversary and the anticipation of Burrow capture now intoxicated the group with adrenaline. As a slow rain began to fall the outlaw’s tracks began to melt away along with McDuffie’s hopes of capturing Burrow.

As McDuffie’s group closed in on Burrow the rain began to wash away the remnants of Burrow’s trail. It was about this time that McDuffie saw a small house in the distance and a lone man entering the dwelling.

McDuffie, who had been an acquaintance of Burrow, entered the house first. Burrow and McDuffie exchanged recollections of times gone by and then discussed each other’s rifles.

Had there not been such serious business at hand it would have almost been likened to a meeting between old friends. Burrow laid his rifle in the corner and turned his back to his pursuer long enough for McDuffie to seize him while the other McDuffie men simultaneously snatched Burrow before he could take a revolver from his holster.

The “Great Rube,” as he was called, had $178 in cash and $2,000 in railroad checks in his coat pocket at the time of his capture. He also had an assortment of weapons including two six-shooters, a rifle and a pistol which was taken from the express messenger in Flomaton but which was not retrieved when he was captured.

McDuffie took Burrow to the Linden jail where he turned over all of Burrow’s belongings to Carter, the storekeeper who had been of assistance earlier in the pursuit. Thereafter, Burrow was placed in a cell where he was tied and handcuffed. McDuffie’s associates were required to maintain a watch on Burrow with their pistols trained on him in case of escape. Burrow drifted off to sleep in the damp jail cell as his fleeting thoughts surely turned to the fate of his neck, which was certain to meet the hangman’s noose sometime soon.

Around 4 a.m., Burrow called to McDuffie’s men asking for something to eat. One of the men responded, “I can’t get nothing this time of night, Bossman.”

Burrow told the men that his saddlebag contained a good supply of crackers, which he’d divide with the men if they’d retrieve the bag. After having the bag passed to him, Burrow pulled out the handful of soda crackers that he happily divided with his captors.

Needing an early morning snack, the men placed their guns behind them and began to eat. It was at this point Burrow reached into the other side of the saddlebag and drew the revolver taken in the Flomaton train robbery.

Burrow is said to have told the men that he’d blow their brains out if they didn’t untie him. The men followed his commands, and soon Burrow had his three guards locked in the jail. With his freedom in hand, Burrow was on his way to pay a visit to Jefferson Davis Carter.

Carter was prepared for the possibility of a Burrow escape so when the knock at the door came, he was ready. Carter recognized Burrow as he met him at the door with revolver in hand. Carter discharged the weapon. The bullet ripped into Burrow who returned the shot. As a wounded Burrow retreated from the cabin, Carter was right behind him with the flesh piercing sound of gunshots disturbing the splendid desolation of the early morning tranquility.

The smoke hung heavy over the cabin and the porch where the exchange had occurred. A neighbor, alerted by the sounds of gunfire, arrived to find both men lying on the ground in a pool of shared blood.

It was Oct. 2, 1890, and the outlaw Rube Burrow, 36 years old, lay dead in the small West Alabama town that had become the site of his last stand. Jefferson Davis Carter survived the encounter but was left an invalid for the rest of his life.

Kiwanis serve up a “blue-tiful” breakfast