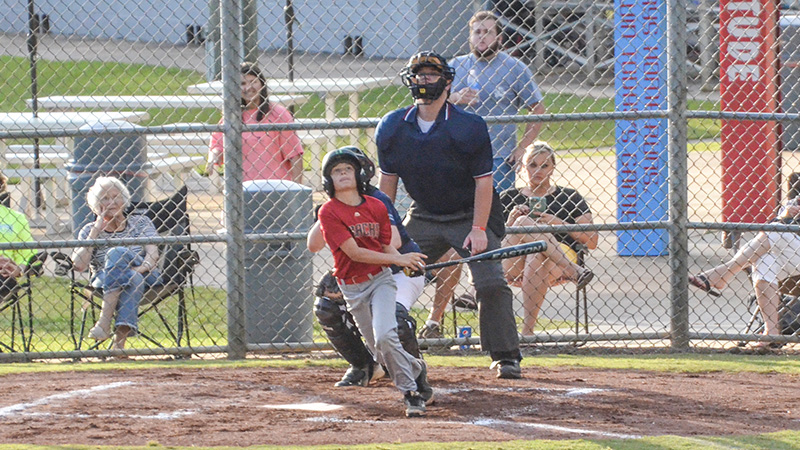 Area teams recently picked up wins in youth baseball and softball. Here are some of the action shots and results from games held April 24 through May 1.

Gracie Sims and Jailyn Bondurant combined from the pitching circle to get the win for the Lady Royals.

Bondurant, Sims and Jaelyn Gantt each had a hit.

Jennings Ruzic was the losing pitcher. Jayden Mitchell had the lone hit for Wildcats.

Amiyah Odom and Jayda Johnson combined from the pitcher’s circle to no=hit the Red Raiders. Odom had four strikeouts. Kennedy Johnson and Annamaria Monk each had a double. Kendall Johnson and Marissa Baker had a hit.

Jailyn Bondurant had two hits in the Lady Royals win. Bondurant and Precious Howard combined to no-hit the Red Raiders. Caroline Williamson, Peyton Myrick and Kaitlyn Bennett pitched in a losing effort for the Red Raiders.

Fourteen walks hampered the Lady Gray, as the Lady Lime only had two hits of the bats of Maddie and Natalee Mealer.

TyYona Wright tossed a no-hitter versus Gold Ladies. Wright allowed two runs, on six walks, and had eight strikeouts. Jordan Williams, Jada Godbolt and Makayla White each had a hit.

Three errors by the Gray Ladies, and five hits by LSU spring boarded the LSU ladies to a one sided win.

Kinsley Byrd had eight strikeouts from the circle to lead LSU to the win. Lady Gray pitchers combined for 12 walks.

Byrd and Rebekah Rowell each had two hits for LSU.

Both teams had two hits but it was pitchers Caleb Peters and Gavin Rose of the White Sox who were able to shut out any big rally by the Yankees. Dakota Rose and Ke’shon Paul had hits for the White Sox.

Carson Stinson and Gage McCall had hits for the Yankees. Collin Nelson suffered the loss on the mound.

Gavin Rose was the winning pitcher for the White Sox. Rose had eight strikeouts on the mound. Carson Stinson suffered the loss. Stinson had a double to lead the Yankees. Solomon Crapp and Dalton Graves each had a hit.

Rose was 2-for-2 with a double. Carter Hodges had a double.

Thomas Lowery was masterful on the mound, pitching a no-hitter and striking out 11 batters in the win. Ed Dolihite had a hit and scored to runs to lead the Diamondback offense. Ty Qualls had a hit. Dakota Rose scored two runs for the White Sox.

The Red’s Sam Kelley had eight strikeouts in a one-hit performance on the mound.

Nelson had the lone hit for the Yankees. Sam Kelley was 2-for-2 with a double and scored two runs to lead the Reds on offense. Tennison Carnley, Landon Barrentine, Cole Kelley and Matthew Kirkland each had a hit.

The Blue Jays’ Easton Grace surrendered only one hit and had nine strikeouts in the win. The Orioles’ J-Man Jones was the losing pitcher but was impressive with nine strikeouts.

E.J. Kelly and Justin Buckhaldt were both 2-for-2 to lead the Blue Jay offense. Kaden Wood had a double.

Williams Sanders had a hit for the Orioles.

Kaden Wood and Justin Buckhaldt had multiple hits to lead the Blue Jays. Elijah Stone was the losing pitcher for the Red Sox. Stone surrendered five runs, on six hits, one walk. He had six strikeouts.

Warren Cane went the distance on the mound for the Orioles and picked up the win. Can allowed eight runs, three hits, four walks, and struck out five. Dylan Pettis suffered the loss on the mound for the Red Sox. Jayden Stuckey and C.J. Gibson led the Orioles with a double each. Kegan Tucker ha d a hit and scored three runs. Cohen Ziglar was 2-for-2 with a double and scored a run to lead the Red Sox.