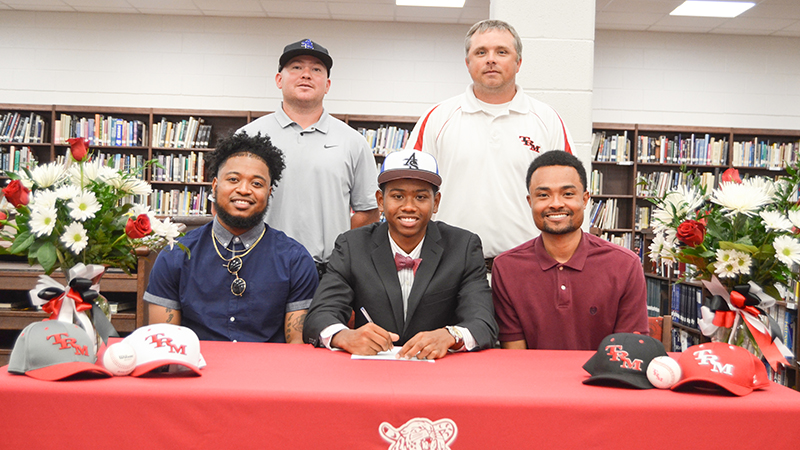 “He’s capable of doing a lot of things” Hall said. “He’s a good runner, a good defender, and has a pretty good arm as an outfielder. He can also play infield. We’re losing most of our outfield so to get him is a big plus. He just brings a lot of grit and toughness to the game. I know he’s battled through some injuries and really has shown some perseverance. I think he can really come in and push for a starting job in our program and represent us well on and off the field.” 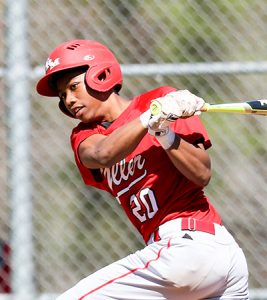 Ronnie Knowles | Down South Photography
Williams has a career batting average of .287, with 58 hits, 35 RBIs, 10 doubles and 92 runs scored.

Williams, who was set to attend the University of Alabama for academic purposes, said playing this past season reminded him how much he loved playing the game and wasn’t ready to give it up.

“A lot of things happened in my life where I was kind of ready to move on,” Williams said. “Then this past baseball season I realized how much this game means to me. If I did go to Alabama and not play, then I might regret it. Without a doubt I’m making the right choice for me.”

Williams said out of all the colleges he visited and worked out for, CACC Monroeville is where he felt most at home.

“The coaches showed me around campus and told me what I was expecting to see,” Williams said. “They expressed how much they wanted me to be a part of the team. It was no question in my mind I wanted to go play for them. It was an easy decision for me. I can go exceed in academics there as well, because that’s what the coaches like to see. They promote academics and I like that.”

Williams batted .275 with four doubles, a homerun, 11 RBIs, 41 runs scored, and 10 stolen bases in 29 games this season. He suffered a broken thumb that forced him to miss eight games.

He returned to play in the Tigers’ five playoff games at the end of the season versus Montevallo and Gordo where he batted .200 with six runs scored.

His junior year a strained ligament in his right wrist sidelined him for the last 16 games of the season. He finished with a .262 batting average.

“The injuries I went through made me realize it’s just an obstacle in my game,” Williams said. “If anything it motivated me to hit the weight room and to keep fighting. I’m a team player, injured or not, so I’m going to be out there no matter what. Those injuries sucked, but there was a part of me telling me to just keep fighting and playing.”

“I’m excited for Jordan,” said TRM head baseball coach Kevin Madden. “He shows up every day and works to get better. He has tools that’s going to help him be successful.

“He runs with good speed. He’s able to hit in the leadoff spot. He puts pressure on defenses at the plate. In the outfield he’s solid. We’re going to miss him, but the Eagles are getting a quality player and person off the field.”

Williams’ brother, Allen, played for CACC Monroeville, then Alabama Southern, from 2007 to 2009.

“It’s kind of hard to describe the excitement when your brother has been through so much and to still come through the way that he has and never miss a beat,” Allen said.

“He always stayed on track and never got in trouble. It’s not always easy though he made it look that way and for him to go to (CACC Monroeville) where I played it’s almost like full circle. I know Mom and Dad are smiling down. I know they’re proud of all of us, but especially for him being so young and staying on top of everything as he has. After graduation Friday, it’s on to the next one.”

Williams said he is very thankful for the support he’s had through the years.

“First I want to thank God to allow me to keep playing the game I love,” Williams said. “I want to thank Corey and Allen for being there no matter what happens. I want to thank all the other families that supported the Williams family,  all my teammates through the years, my friends who’ve been there for me through hard times, and the coaches for all they did and what they taught me.”

“I just know it’s going to be a pleasure playing with Tripp once again. I know he’s competitive and so am I. It should be a fun time enjoying the sport we love.”

Williams said he plans to study visual arts in college. He is the son of the late Alfonzo and Elena Williams. He has two older brothers, Allen Williams of Daphne and Corey Williams of Brewton.